Senior Course 134 visited Montenegro on 18 June 2019, on the last stage of its ‘European Perspectives II’ Field Study. The delegation was welcomed by Colonel Svetozar Brajković, Deputy Chief of Defence of the Armed Forces of Montenegro. This is the NDC’s second visit to Montenegro, underlining the excellent working relationship. 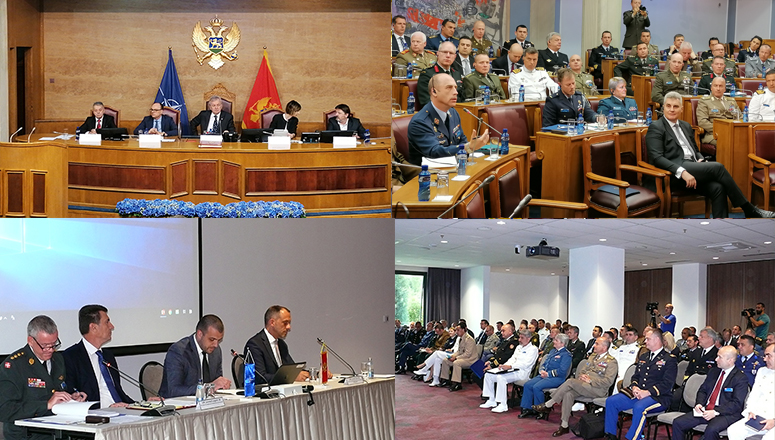 Mr Ivica Ivanovič, General Director of Defence Policy and Planning from the Ministry of Defence, spoke about defence priorities, highlighting democratic control as the guiding principle. Security in NATO is a shared responsibility and membership has brought positive results for the economy (e.g., numbers of tourists) as well as for security (e.g., air policing). The speaker gave a brief overview of the strategic security documents subsumed within the Montenegro Armed Forces Development Plan 2025; he also dwelt on the Montenegro National Security Strategy (adopted in December 2018), the Strategic Defence Review of 2018, and the resulting defence strategy.

Mr Dragan Pejanovč, State Secretary and National Coordinator for NATO, described integration in NATO and EU as a backbone of security of the Western Balkans and as the trigger to revisit and rebalance related thinking. NATO membership and established statehood are major milestones in Montenegro’s development. Among actions and initiatives taken which present Montenegro as a reliable NATO Ally, he mentioned the planned participation in NATO’s Training Mission Iraq, and the firm commitment to achieve the 2% defence spending pledge.

Colonel Aleksander Pantović, Chief of Staff of the General Staff, provided an insightful brief on the Montenegrin Armed Forces’ challenges and defence strategy. The most recent NATO member, with a population of 625,000, a total area of 13,812 sq km and a coastline of 293 km, existed for 90 years without a Ministry of Defence or General Staff. Accession to NATO has therefore been of incalculable value as a source of strategic insight for Montenegro’s security and defence.

Mr Ivan Brajković, President of the Montenegro Parliament, gave an insightful strategic analysis of Montenegro’s challenges in relation to NATO, EU, regional, legislative, financial, economic, defence and security questions. NATO membership was highlighted as a contribution to long-lasting security and peace, as well as facilitating adaptation to the changing geopolitical and geoeconomic environment.

The NATO Defense College delegation greatly appreciated the warm welcome it received in Montenegro, the quality of the briefings, and the in-depth answers during the Q&As.