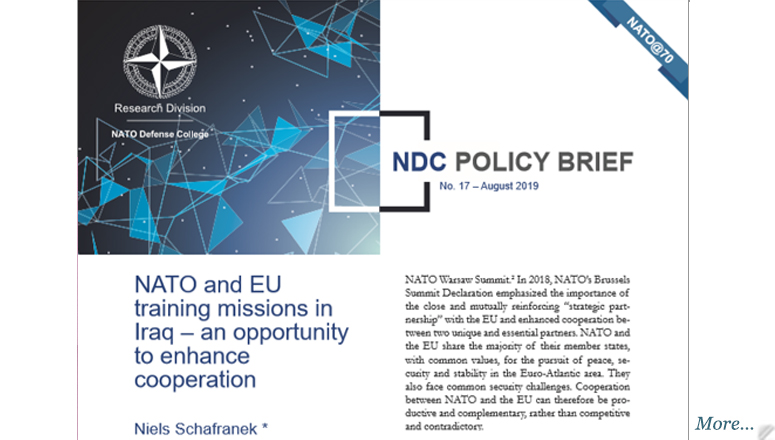 For the past fifteen years, NATO-European Union (EU) cooperation has been expanding with mixed results. Fundamentally, the two organizations are different: NATO, as an intergovernmental military alliance, focuses on collective defence, crisis management and cooperative security. The EU, on the other hand, is a political and economic union that has developed a security agenda under the Common Security and Defence Policy (CSDP). However, there are also overlapping security activities such as the so-called “Petersberg tasks”, involving the EU in peacekeeping, and potentially even tasks of combat for EU forces in crisis management1.

While cooperation has improved between the two institutions over the last few years, both organizations see a potential for further deepening the partnership. In 2016, EU-NATO cooperation was made a priority of both institutions by the EU-NATO Joint Declaration, adopted in the margin of the NATO Warsaw Summit.2 In 2018, NATO’s Brussels Summit Declaration emphasized the importance of the close and mutually reinforcing “strategic partnership” with the EU and enhanced cooperation between two unique and essential partners. NATO and the EU share the majority of their member states, with common values, for the pursuit of peace, security and stability in the Euro-Atlantic area. They also face common security challenges. Cooperation between NATO and the EU can therefore be productive and complementary, rather than competitive and contradictory.

*(back) Senior Legal Advisor and Chief Military Disciplinary Attorney of a German Army Division. Niels Schafranek was a Course Member in the NDC’s 133th Senior Course, from August 2018 to February 2019. This Policy Brief is a revised version of his end-of-course Individual Paper.
1(back) “Petersburg Declaration”, Western European Union (WEU), Council of Ministers, 19 June 1992.