The NATO Regional Cooperation Course (NRCC) was founded in 2009, following a decision taken by Alliance Heads of State and Government at the Riga Summit in November 2006. It represents the Allianceâs major educational outreach towards Mediterranean Dialogue (MD) and Istanbul Cooperation Initiative (ICI) countries, and partners from the Middle East region. Taking place twice a year, this ten weeks Course has been developed to promote closer dialogue and increased cooperation in the field of education; to aim at more broadly linking issues of concern to both MD, ICI nations and NATO; and to develop mutual understanding and networking amongst participants. 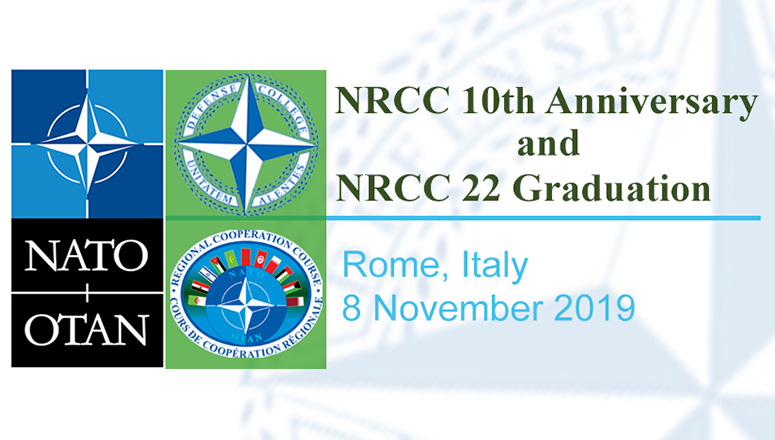 Held in conjunction with the graduation ceremony of NRCC-22 Course Members, this yearâs 10th anniversary celebration will comprise of a panel discussion on âThe importance of Professional Military Education in Projecting Stability to the MENA Regionâ. The speakers include H.E. Sheikh Fawaz Meshal Al-Sabah from Kuwait, Head of Information and Security Follow-up Sector and Assistant Deputy Minister of the National Security Bureau; Dr Pierre Razoux, Research Director of Strategic Studies at the Institute for Strategic Research/Ãcole Militaire (IRSEM) in Paris. In addition, the Keynote speaker for the Graduation ceremony will be H.E. Ambassador Alessandro Minuto Rizzo, a pivotal figure in the establishment of the NRCC programme.

Since its inception, the Course has made significant progress in advancing cooperation between NATO and its partners and the programme is of great importance to the Allianceâs aim of bridging divides and strengthening ties between NATO and the broader Middle East.