On 4 November, Senior Course 135 left for Berlin for the first leg of the European Security Perspectives & PfP Field Study. 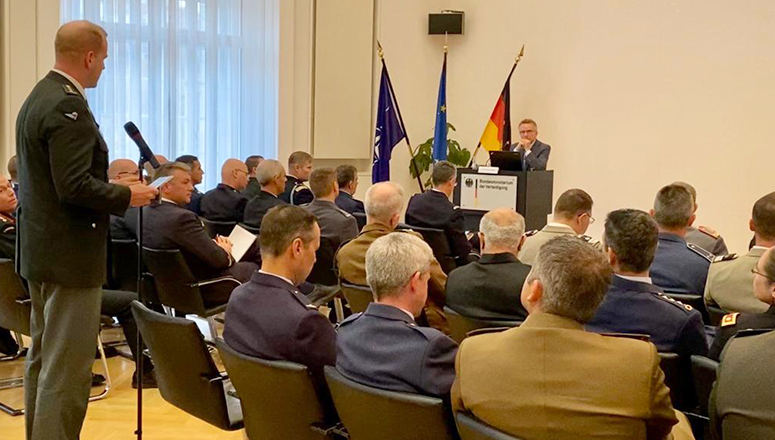 Dr Karl-Heinz Kamp, Special Envoy for the Political Director of the German Ministry of Defence, provided a briefing on German security policy, followed by a Q&A session, in which security challenges, the German principles of security policy and Germany's role in NATO and the EU were presented and discussed. He explained that todayâs mix of complex security challenges is simultaneous and mostly cross-border. Internal and foreign policy is becoming blurred. One country alone cannot provide the solutions, and more measures are needed than just military ones. A comprehensive approach is necessary. He also stressed the importance of leadership. Germany still sees NATO as an anchor in the context of security and Dr Kamp indicated that Germany makes a significant contribution to the Alliance and illustrated this with examples, including the issue of burden sharing and the modernization of NATO. With regard to the EU, he emphasized that Europe must do more for security.

This was followed by a briefing on "The employment of Armed Forces in International Crisis Management and Territory and Collective Defence" by Brigadier General AndrÃ© Bodemann, Chief of Military Policy and Operations Division (II), also followed by a Q&A session. He indicated that Germanyâs future commitment to short and medium term operations will remain more or less at the same level and will always take place within a framework of partners. Multinationalism remains a key factor (key capabilities, burden sharing etc.). In this respect, interoperability is also a key factor. Finally, he stressed the challenge of avoiding overstretched forces and the need for flexibility to cope with changes and upcoming challenges.

Following the event, the Senior Course visited the Bundeswehr Memorial.

At the Paul-Lobe House, Senior Course 135 was welcomed by Mr Peter Beyer, Coordinator of Transatlantic Cooperation at the Federal Foreign Office and member of the Bundestag This was followed by panel discussions and a Q&A with members of the Bundestag representing the AfD, the CDU/CSU and the SPD.

The briefings and discussions from a policy, operational and political view gave a good understanding of Germany's perspective with regard to security issues, and its role within NATO.

In the evening the SC was invited to the Federal Ministry of Defence for a Bavarian dinner and was welcomed by Mr Thomas Silberhorn, Parliamentary State Secretary for Defence, and member of the Bundestag.

The visit to Berlin ended the next day with a sightseeing tour before the departure to Paris.