On Tuesday 10 December, Senior Course 135 with LGEN Chris WHITECROSS as Head of Delegation visited the Hellenic Minister of Defence and the Hellenic National Defence General Staff (HNDGS). SC 135 was received by the Deputy Minister of Defence Mr Stefanis ALKIVIADIS who provided the opening remarks, in which he stressed the importance of the NDC in strengthening relations between the military and civilians. 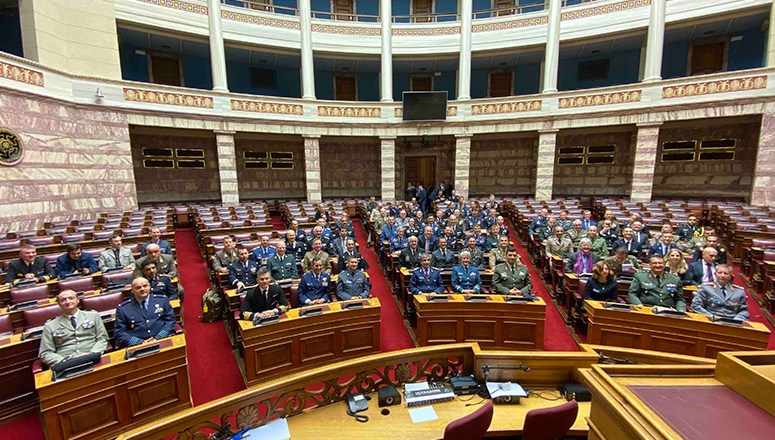 He was followed by BGEN Ioannis BIRMPILIS Director Defence Policy of the HNDGS, who explained the structure and mission of the Greek Armed Forces, current Greek Defence Policy and its security challenges with a particular emphasis on migration issues. The alternate Minister of Public Order and Citizensâ Protection Mr George KOUTMOUTSAKOS described the challenges posed by the migration issue in Greece from a European and international perspective. Ambassador Kyriakos LOVKAKIS from the Ministry of Foreign Affairs briefed on âGreek Foreign Policyâ, in which he stressed the importance of diplomacy in addressing the security problems in the Eastern Mediterranean and the Balkans, and the important role that an enhanced relationship between NATO and a stronger European Union should play to promote peace and security in the region.

Commodore George KARAGEORGOS, supported by Lieutenant Commander Antonio SOFIADELIS from the Coast Guard of the Hellenic Ministry of Maritime Affairs and Insular Policy, briefed the group on immigration trends in the Mediterranean.

SC 135 then went to the Hellenic Parliament where they were received by the Standing Committee on National Defence and Foreign Affairs, chaired by Mr Konstantinos GKIOULEKAS.

After his introductory remarks, the President of the Parliament Mr Konstantinos TASSOULAS addressed SC135, stressing the importance of NATO for Greece since the country joined the Alliance in 1952. He was followed by the President of the SCNDFA who focused on the Eastern Mediterranean.