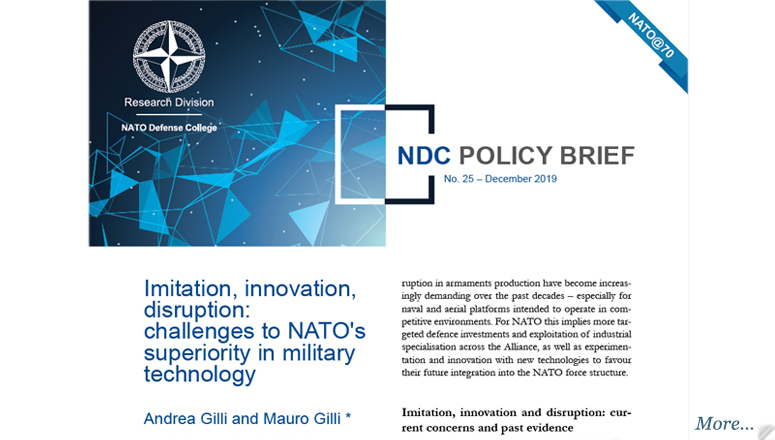 Analysts, academics and observers are worried that NATO countries may lose their industrial leadership in defence production. Globalization and advances in communications are widely believed to enable enemies and adversaries alike to copy NATO countriesâ stateof- the-art weapon systems, and possibly even surpass them by developing next-generation weapon systems. Moreover, so-called disruptive technologies like artificial intelligence, quantum computing and additive manufacturing are believed to offer cheaper and less technologically demanding options to countries that do not possess the decadesâ old defence industrial base of NATO countries. These countries could then use such new technologies for weakening NATO force structure.1

These concerns are real and deserve close scrutiny. However, adversaries and competitors still face significant challenges which are more insidious than those NATO countries are facing. Because of the complexity of modern technology, imitation, innovation and disruption in armaments production have become increasingly demanding over the past decades â especially for naval and aerial platforms intended to operate in competitive environments. For NATO this implies more targeted defence investments and exploitation of industrial specialisation across the Alliance, as well as experimentation and innovation with new technologies to favour their future integration into the NATO force structure.

1(back) This debate is summarised in A. Gilli and M. Gilli, âWhy China has not caught up yet: military-technological superiority and the limits of imitation, reverse engineering, and cyber espionageâ, International Security, Vol.43, No.3 (Winter 2018/19) and A. Gilli and M. Gilli, âMilitary Power in the Second Machine Ageâ, paper presented at the US Department of Defenseâs Joint Artificial Intelligence Center, 30 August 2019.