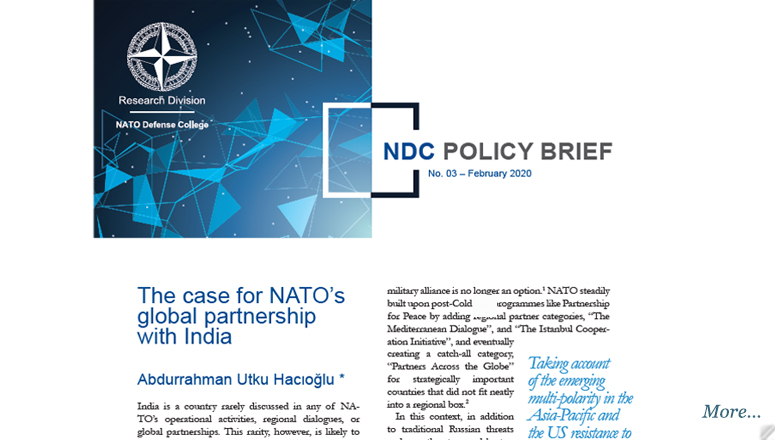 India is a country rarely discussed in any of NATOâs operational activities, regional dialogues, or global partnerships. This rarity, however, is likely to change because of shifting political and economic trends, emerging threats from outside NATOâs traditional Euro-Atlantic area, and the necessity to adapt to changing circumstances. Taking account of the emerging multi-polarity in the Asia-Pacific and the US resistance to change, India will become a key country to counter-balance Chinaâs and Russiaâs growing influence, to project stability and strengthen security in the Asia-Pacific region in the near future. NATO should take advantage of the opportunity, consider India as a key strategic partner, and include India within NATOâs growing strategic partnership framework as a âPartner Across the Globeâ.

NATO has spent most of the past 70 years focusing on how to defend Europe against Russia but with the attacks of 11 September 2001, the Alliance realized that a range of threats originate from regions where it had not been focused. In a globalized world, projecting stability and strengthening security outside NATO territory have therefore become vital elements of the Allianceâs policy, and limiting its role to a Euro-centric military alliance is no longer an option.1 NATO steadily built upon post-Cold War programmes like Partnership for Peace by adding regional partner categories, âThe Mediterranean Dialogueâ, and âThe Istanbul Cooperation Initiativeâ, and eventually creating a catch-all category, âPartners Across the Globeâ for strategically important countries that did not fit neatly into a regional box.2

* (back) Senior associate, the Presidency of the Republic of Turkey, Presidency of Defence Industries (SSB). Abdurrahman Utku HacÎ¹oÄlu was a Course member of the NDC’s 134th Senior Course, from February to July 2019. This Policy Brief is a revised version of his end-of-course Individual Paper.
1 (back) S. Huria, “India and the ‘Global NATO’: expectations and reservations”, Institute of Peace and Conflict Studies, 26 January 2009.
2 (back) See N. Chaban et al., “NATO Global Perceptions - Views from the Asia-Pacific Region”, Asian Security 14, No.1, 5 September 2017, pp.1-2.