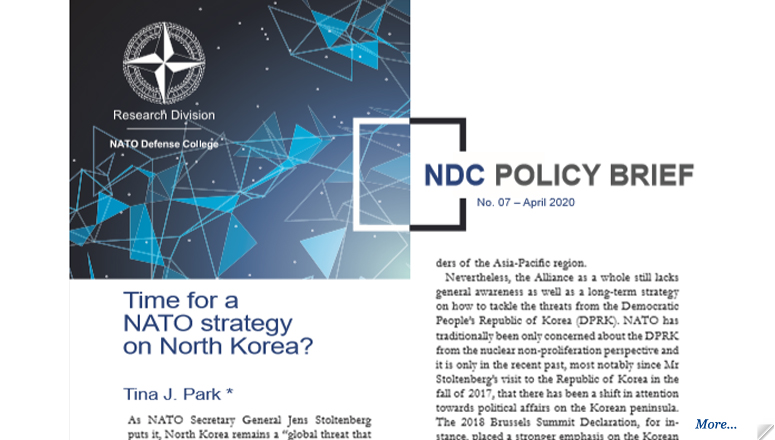 As NATO Secretary General Jens Stoltenberg puts it, North Korea remains a âglobal threat that requires a global responseâ. The threats posed by North Korea are arguably imminent, with the potential to cause serious harm to the security of NATO member states. Since 2006, North Korea has conducted six nuclear tests, in clear defiance of the Treaty on Non-Proliferation of Nuclear Weapons (NPT) that the regime withdrew from in 2003. To date, the international community has failed to tame North Koreaâs nuclear ambitions, despite various diplomatic and political efforts. In addition to its nuclear capabilities, Pyongyang has made significant advances with conventional weapons, both chemical and biological, as well as with its cyber capabilities. North Koreaâs substantive linkages to China and Russia, and non-state terror groups like Hezbollah and Hamas in the Middle East, amplify their threats beyond the borders of the Asia-Pacific region.

Nevertheless, the Alliance as a whole still lacks general awareness as well as a long-term strategy on how to tackle the threats from the Democratic Peopleâs Republic of Korea (DPRK). NATO has traditionally been only concerned about the DPRK from the nuclear non-proliferation perspective and it is only in the recent past, most notably since Mr Stoltenbergâs visit to the Republic of Korea in the fall of 2017, that there has been a shift in attention towards political affairs on the Korean peninsula. The 2018 Brussels Summit Declaration, for instance, placed a stronger emphasis on the Korean peninsula compared to previous summits in Wales (2014) or Warsaw (2016). Such a shift was in response to various inter-continental ballistic missile tests in 2017 that the DPRK engaged in, as well as to the heated public exchanges between President Trump and DPRKâs leader Kim Jong-Un.1

* (back) Vice-President of the NATO Association of Canada and Executive Director of the Canadian Centre for the Responsibility to Protect at the University of Toronto. Tina Park was âPartner around the Globeâ Fellow at the NDC from January to May 2019.
The author wishes to thank Maj.Gen. Jan Toft from the International Military Staff Cooperative Security Division at NATO HQ, Camille Grand from the Defence Investment Division at NATO HQ, Brig. Gen. Greg Smith at SHAPE, Captain RCN Jamie Cotter at the Canadian embassy in Seoul and the Hon. Hugh Segal for their invaluable guidance and support for this research.
1 (back) The 2018 Brussels Summit Declaration noted: âWe reiterate the Allianceâs full support to the goal of complete, verifiable, and irreversible denuclearization of the Korean Peninsula... We call upon the DPRK to fully implement its international obligations; to eliminate its nuclear, chemical, and biological warfare capabilities and ballistic missiles, and abandon all related programs. We call on all nations to maintain decisive pressure on the DPRK, including by fully implementing existing UN sanctions... We reiterate our full solidarity with our partners in the region â Australia, Japan, New Zealand, and the Republic of Koreaâ¦â NATO, 11 July 2018.