On 1 September 2020, Air Chief Marshall Sir Stuart Peach, Chairman of the Military Committee, spoke as guest of honour and gave the inaugural address to mark the beginning of Senior Course 137 and NATO Regional Cooperation Course 24 at the NDC. 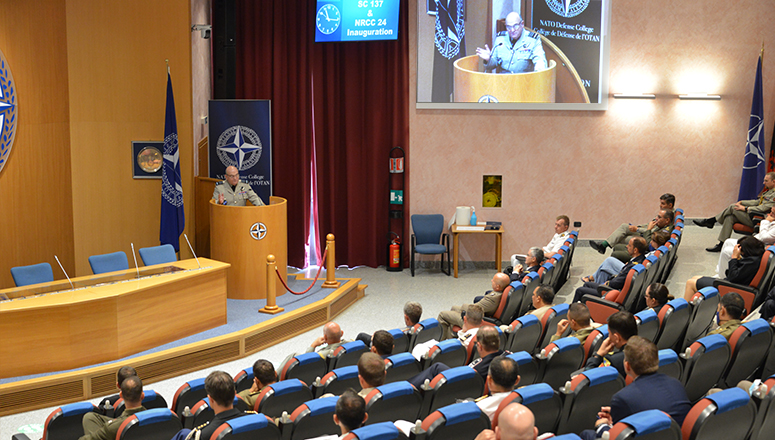 The NATO Defense College held its Inaugural Ceremony for Senior Course 137 and NATO Regional Cooperation Course 24. In full compliance with COVID-19 measures, Course Members, Faculty and Staff gathered in the Maynard-Thorn Auditorium to celebrate the start of both Courses. NDC Commandant Lieutenant General Olivier Rittimann opened the ceremony by welcoming the 73 new Course Members. In his address, he emphasized the role of the Alliance and its evolution over time. He also cited some of the core objectives Course Members can expect to achieve during their time at the NDC, namely, to strengthen their skills in strategic thinking, critical analysis and consensus building.

The guest of honour, Air Chief Marshall Sir Stuart Peach, expressed his pleasure to be back in Rome and at the NDC. In his address to the new Course Members, he described the Alliance as the "cornerstone for transatlantic security". He also advised Course Members, "you will emerge changed from this experience".

Both the Senior Course and the NATO Regional Cooperation Course are comprised of high-ranking military and civilian officials from NATO Member States and Partners.

At the end of the ceremony, Sir Stuart Peach presented Colonel Huber, Military Assistant to the Dean, with the NATO Meritorious Service Medal, the highest NATO medal awarded for service under NATO Command and Control.