From 24 to 26 January 2011 the Commandant of the NATO Defense College, Lieutenant General Wolf-Dieter Loeser, visited Oman to hold talks with Senior Officials and to deliver two speeches on NATO and the Gulf region after the Lisbon Summit. This was the first visit of a Commandant of the NATO Defense College to Oman and represents and important step in fostering closer co-operation between the Sultanate of Oman and NATO. 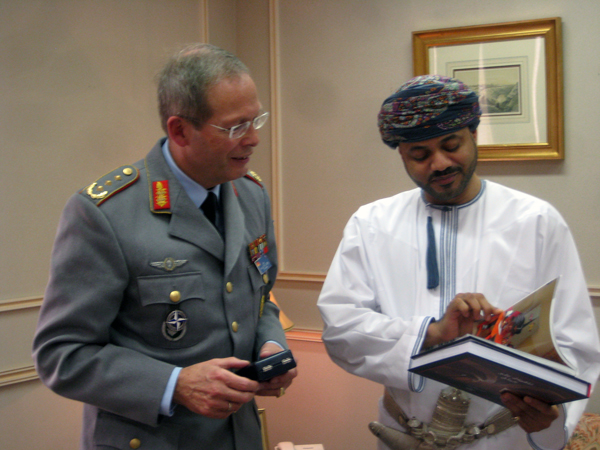 During his visit LtGen Loeser held a bi-lateral meeting with H.E. Sayyid Badr bin Hamad Albusaidi, Secretary General of the Ministry of Foreign Affairs of the Sultanate of Oman. They discussed areas of mutual interest, including terrorism, piracy, and regional security in the Middle East and also discussed joint areas of co-operation in the field of education and training for Omani diplomats and officers.

General Loeser also had a meeting with Lieutenant General Ahmed bin Harith al-Nabhani, Chief of Staff of the Sultanâs Armed Forces. Both discussed new avenues of co-operation in the area of education. In that context General al-Nabhani and General Loeser agreed to co-operate on a number of issues ranging from joint visits, exchange of lecturers and possible participation of Omani officers in courses at the NATO Defense College, such as the NATO Regional Cooperation Course (NRCC) and the General and Flagg Officers and Ambassadors Course (GFOAC). General Loeser thanked General al-Nabhani for his support and hospitality and invited him to Rome in the near future to deliver a lecture at the NATO Defense College.

General Loeser also visited the Sultanâs Armed Forces Command and Staff College in Oman and received a tour of the college. He also met with Commodore Mahfood Hamood Alwahaibi, the Commandant of the Sultanâs Armed Forces Command and Staff College, and Brigadier General Awadh bin Mohammed bin Said Al-Mashaiki, Head of the National Defence College Committee in Oman. Together they reviewed areas of mutual co-operation and agreed to pursue joint education efforts for Omani officers at the NATO Defense College in Rome and exchange visits to further cooperation in the field of education and training.

At the Sultanâs Armed Forces Command and Staff College, General Loeser delivered a speech on âNATO and the Gulf region after the Lisbon Summit: Implications from the New Strategic Conceptâ and addressed the course members of the College and answered their questions.

During his speech, General Loeser highlighted the need to cooperate together with the Sultanate of Oman and other Gulf states in order to address the new security challenges, including terrorism, the proliferation of Weapons of Mass Destruction, and instability due to failed and failing states. But General Loser also reminded that none of these challenges can be tackled alone and they cannot effectively be solved jointly if partners do not share the same perception of these challenges. Too many misperceptions still harm us. Hence there is a great need to focus on mutual and joint education as the most effective way to face future challenges in a global security environment together. Commodore Alwahabi, the Commandant of the Omani Staff and Command College thanked General Loeser for his speech and his visit to the college .

On 26 January, General Loeser gave a lecture at the Diplomatic Institute of the Ministry of Foreign Affairs. In his speech, he highlighted the many areas of joint concern between NATO and the Sultanate of Oman, including piracy, stability in Middle East, terrorism, disarmament and the dangers of arms races, energy security and the dangers emanating from failing and failed states, and finally stability in Iraq. The lecture was attended by officials from various ministries including the Ministry of Foreign Affairs, the Royal Diwan, and the Ministry of Interior. General Loeser also warmly invited Omani diplomats to attend courses at the NATO Defense College, such as the new NATO Regional Cooperation Course (NRCC), in order to share experiences and to learn from each other in a true spirit of a two-way cooperation. General Loeser was thanked by Dr Hamad Al-Mahrouqi from the Diplomatic Institute for his speech and General Loeser thanked in turn the Government of the Sultanate of Oman and the Omani Ambassador in Rome, H.E. Said Al-Harthy, for their initiative in organising this visit and bringing about these meetings.