On 12 May, SC124 visited Headquarters Supreme Allied Commander Transformation (HQSACT) in Norfolk, Virginia. The group was warmly welcomed by Assistant Chief of Staff Capability Engineering & Innovation, BGen Henrik Sommer (DAN A), an Ancien of the College and former Course President of SC 123. In his opening remarks, the speaker briefed Course Members on the structure, mission and tasks of Allied Command Transformation (ACT), underlining the importance of the Commandâs role in terms of Alliance interoperability. 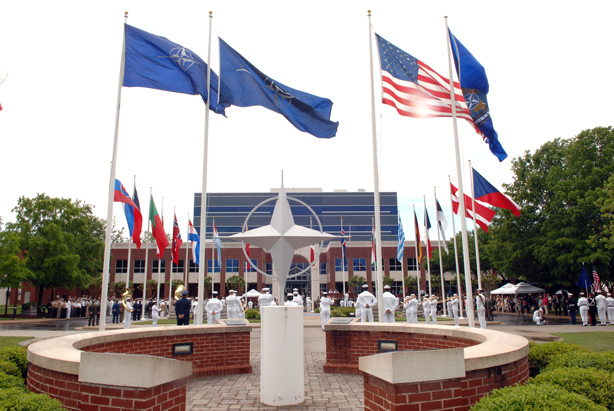 The NDC delegation was then addressed by General Jean-Paul PalomÃ©ros, Supreme Allied Commander Transformation (SACT), who spoke about the reaffirmation of the Allianceâs fundamental values in response to the current tensions between Ukraine and the Russian Federation. He also commented on expectations for the forthcoming NATO Summit in Wales.

Dr Daria Daniels Skodnik (SVN C), NDC Dean, afterwards had the opportunity to spend time with General PalomÃ©ros and to discuss with him the NDC's contribution to the education of future Alliance leaders, with a view to possible cooperation with SACT HQ in response to contemporary issues and challenges.

The next speaker was Capt (N) Cox, who provided detailed information on the involvement of ACT in the NATO Forces 2020 and 2030 projects.

Capt (N) Mark Cooper then reviewed the implementation of the NATO Defence Planning Process (NDPP), focusing on the importance of political guidance and the visibility of this project. The NDPP, which provides holistic and integrated advice to the North Atlantic Council (NAC), offers a coherent, comprehensive and transparent framework, contributing greatly to the implementation of the Comprehensive Approach.

After this, Course members were briefed on Smart Defence by LtCol Bill Brown. Explaining that the main purpose of the initiative is to develop capabilities more efficiently and with greater involvement of partners and industry, the speaker gave examples of multinational solutions which are being implemented and promoted by ACT.

The next presentation was by Mr Dick Bedford, who discussed the significance of NATO partnership programmes as a means of achieving global connectivity and working with a broader range of partners. As recent NATO operations have shown, cooperation with partners is an indispensable resource for ensuring peace and security.

The last speaker at HQSACT was Capt (N) Berend Burwitz, who presented the Connected Forces Initiative (CFI). He explained the CFIâs structure and mandate, stressing the role played by education and training, frequent exercises and better use of technology. The speaker emphasized the importance of individual training on NATO issues, with a view to fostering interoperability within the Alliance and with partners.

The session concluded with a panel discussion, in which MGen Jan Lilland, BGen Dzinters Roga and BGen Xavier Watteeuw joined all the speakers from the session to answer a range of challenging questions from Course Members.

Following a very successful day at ACT, SC 124 travelled to New York for a further round of institutional visits and briefings.

On 13 May, SC124 visited the German House, the seat of the Permanent Mission of Germany to the United Nations in New York City, in order to meet NATO and UN representatives. Col Andreas Stoebe, Germanyâs Military Advisor to the UN, graciously welcomed the group.

The next speaker, Ms Elizabeth Spehar, Director of the Europe Division in the Department of Political Affairs at the UN, focused initially on the strengthening of relations between the UN and NATO. She then described the significance of UN political missions and peacebuilding support offices, as well as the contribution of deployable peace and development advisers in crisis situations.

Col James Cunliffe, Military Adviser to the Office of Military Affairs in the UN Department of Peacekeeping Operations (DPKO), gave an overview of the DPKOâs structure and functions, underlining the close integration of its civilian components. He also provided information on the seventeen current UN missions, involving a total of 117,000 troops from contributing Member States. He also spoke more generally about new approaches to peacekeeping. For the ensuing discussion, the speaker was joined by LtGen Magsood Ahmad, Military Adviser to the UN Secretary General.

The last speaker of the day, Ms Renata Dwan, Team Leader of the DPKOâs Integrated Operational Team (IOT) for Asia, gave an excellent presentation on the role and functions of the IOT, which includes military, police and civilian experts and contributors. She also provided an analysis of the current situation in Afghanistan, highlighting that the UN should be the main coordinator of international assistance there after the withdrawal of ISAF.

Having concluded a very successful visit to the United States, the NDC delegation now moves to its final destination on the Transatlantic Link Field Study: Ottawa, in Canada.