On 15 May, Senior Course 124 visited the Department of Foreign Affairs, Trade and Development Building in Ottawa, where it received several briefings from senior level Canadian representatives. 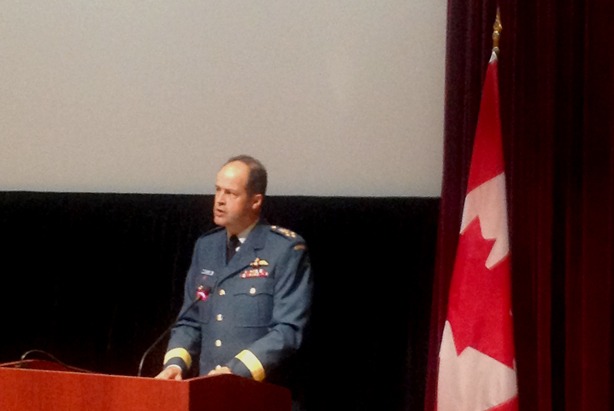 The Course was warmly welcomed by Gen Thomas Lawson, Chief of Defence Staff. In his opening remarks, he underlined that NATO is the bedrock of Canadaâs defence and security policy. He also emphasized that Canada fully upholds the fundamental common values of the Alliance, and that the forthcoming NATO Summit in Wales will be a real opportunity to demonstrate that NATO is still the centre of gravity of world security. Given Canadaâs geography, this country makes constant efforts to balance interests between the Atlantic and the Pacific (or between East and West). The need to secure so vast a territory has always made it important to ensure that Canadian forces have an expeditionary character: they are therefore able both to support internal security missions such as search and rescue operations, and to sustain a global military engagement.

During a brief discussion with General Lawson, Dr Daria Daniels Skodnik, the NDC Dean, acknowledged Canadaâs long-standing support to the College, with an excellent level of participation in the Senior Course and valued contributions to the work of the Faculty by many Canadian officers. An invitation to future GFOAC and SERC Courses was warmly extended to senior representatives of the Canadian Defence Forces. Canadaâs excellent experience of cooperation with the NDC was also commented on by LtGen Guy R. Thibault, Vice Chief of the Defence Staff.

The dayâs very full schedule continued with a talk by Ms Jill Sinclair, Assistant Deputy Minister of Policy for the MoD, whose talk was entitled âThe Canada Strategic Setting: Canada in the International Security Environment and NATOâ. Ms Sinclair further expanded on the previous speakerâs premiss that Canada is a closely interconnected with the rest of the world, and listed the transnational challenges of the security environment.

BrigGen T.N. Balfe, Director General Plans of the Strategic Joint Staff, provided Course Members with an overview of Canadian forcesâ missions and priorities. He highlighted the extremely relevant role of public safety support and disaster response forces, as well as the importance of the countryâs geographic position and of its special bi-national military cooperation with the United States. He also commented on the many missions Canada is currently undertaking, as well as future priorities for defence forces.

Mr Philippe HÃ©bert, Director of Policy Development in the Canadian MoD, explained the âCanada First Defence Strategyâ (CFDS), released in 2008, which was the Governmentâs commitment to rebuild the Canadian Forces with a view to ensuring consistent, first-class capabilities. He also talked about evolving domains, including the Arctic, as well as space (including cyber space). Canadaâs goal is to strengthen its presence and capacity in the Arctic area, as well as to achieve robust capability in space within a framework of international cooperation. In the cyber domain, Canada created a Cyber Task Force in 2010.

During the lunch period, Mr James Bezan, Parliamentary Secretary to the Ministry of Defence, outlined Canadaâs most significant political features, together with its commitments and achievements in the defence sphere.

The last presentation of the day was a panel with Ambassador Tamara Guttman, Director General of the Stabilization and Reconstruction Task Force (START), and Victoria Kellett, Deputy Director of Humanitarian Affairs and Disaster Response in the Canadian Department of Foreign Affairs, Trade and Development (DFATD). They presented Canadaâs âWhole of Governmentâ approach to crisis response and stabilization, as well as to provision of aid in the event of natural disasters abroad. As real examples, they spoke about Canadaâs engagement in Sudan and South Sudan, and Canadian operations at the time of Typhoon Haiyan (November 2013) in the Philippines.

Course Membersâ interaction with all the speakers, during dedicated Q&A sessions throughout the day, was particularly rewarding: the NDC group took full advantage of this opportunity to engage with authoritative, high-level representatives of Canadaâs Armed Forces and national institutions.