On Friday 23 May 2014, the NATO Defense College (NDC) welcomed a delegation from the Air Force Academy of Norway, headed by Major Truls Røkke (NOR F) and Major Kjell Solbakk (NOR F), who were greeted, upon arrival, by the NDC Commandant, LtGen Arne Bård Dalhaug (NOR A). 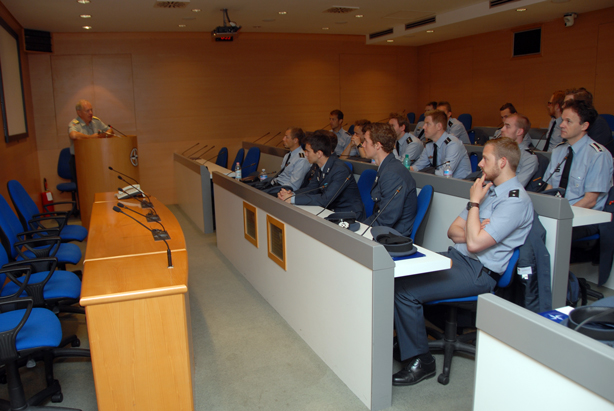 The purpose of the visit was to provide an overview of the mission and activities of the NDC. During the morning, the delegation had the opportunity of attending Senior Course 124âs lecture on âThe future of Special Operationsâ, given by Ms Linda Robinson (USA C). Later, Ms Heidi Reisinger (DEU C), from the NDCâs Research Division, gave a briefing on Russia-NATO relations. Her talk was followed by a stimulating and interactive Q&A session.

The Air Force Academy was established on 1 October 1949, for the training of pilots in the newly-formed Air Force. The school now focuses on training and leadership skills for officers and on preparing them for future responsibilities in a joint operational context. The instruction given seeks to achieve synergy between military skills, academic knowledge, physical ability and character formation, in a learning environment consisting of theoretical and practical exercises which, together, contribute to a holistic model of education.