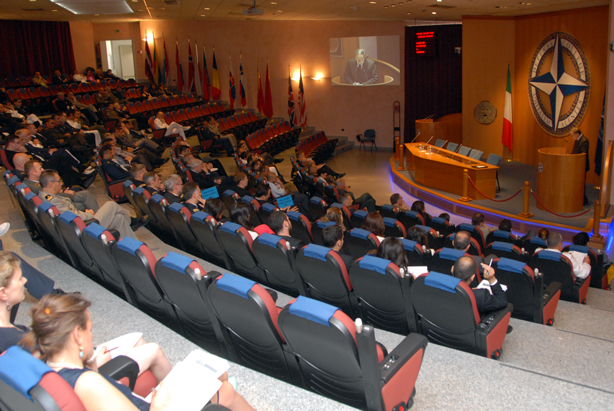 Attendees were addressed on the last morning of the Course by NDC Commandant LtGen Arne BÃ¥rd Dalhaug (NOR A), with an introduction from Col Giuseppe Morabito (ITA A), Director of the NDC Middle East Faculty (MEF).

The NDC Commandant stressed the importance of the comprehensive approach to current security challenges, as well as multi-national involvement. He also focused on the importance of diplomatic tools in preventing and managing crisis situations. Tribute was also paid to the NDC, which provides a forum for the exchange of opinions, and which facilitates discussion with authoritative and well-informed speakers. LtGen Dalhaug thanked all the members of SERC 3 who are: âcourageous people taking steps forward, sometimes against popular sentimentâ.

This provided a fitting introduction to the highlight of this special day, the presence of NATO Deputy Secretary-General, H.E. Alexander Vershbow (USA C), as guest of honour. During the round table discussion and the lecture, Ambassador Vershbow analysed the important role that NATO is playing in numerous crisis management situations around the world. In his inspiring speech, he, of course, underlined the new security landscape in Europe, as a result of Russiaâs recent aggression against Ukraine and its consequences on relations with the Allies. Moreover, he stressed the importance for NATO of a number of challenges, such as: Afghanistan post 2014, the transatlantic bond and other pressing concerns in North Africa and the wider Middle East region.

SERC participants, thus, had the chance to discuss several sensitive topics with the Deputy Secretary-General, including crisis situations in North Africa, smart defence, the Ukrainian crisis, NATO-Russia relations, NATO relations with other International Organizations, NATO partnerships, the terrorist threat in Iraq, and the situation in the Sahel.

Before taking their final leave of the NDC, SERC participants were able to enjoy an informal encounter with refreshments to celebrate the conclusion of a most successful week.