Course Members experienced a different mode of travel on the second leg of the Field Study, arriving in Tallinn on 18 June via ferry across the Gulf of Finland. 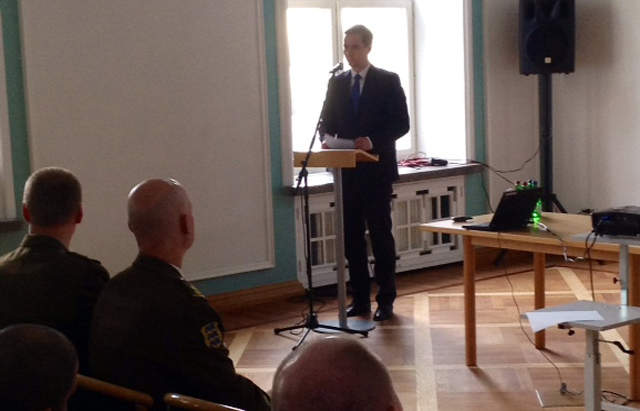 At the Estonian Ministry of Defence on 19 June, they were warmly welcomed by the Permanent Secretary of the Ministry of Defence, Mr Mikk MARRAN. Mr Marran spoke about NATOâs importance to both regional and Estonian national security, and the relevance of NATOâs position on recent events in Ukraine. He concluded with an overview of the institutional briefings scheduled during the day for Senior Course 124.

The Under Secretary for Defence Policy, Mr Sven SAKKOV, then addressed Course Members. Highlighting this briefing was the significant impact of Russian political and military rhetoric and actions on Estonian security and public policy. Although ethnic Russians represent a minority in Estonia, and enjoy the same civil freedoms as do all Estonians, Russian propaganda is evident throughout the country. The speaker explained that the Allianceâs continuous presence in Estonia, via NATOâs Baltic Air Policing Mission, represents a critical aspect of national security planning. He also recognized the contribution of the many NATO nations supporting this mission. Concluding his presentation with brief remarks on Estoniaâs history and system of government, he highlighted the greater national investment in defence planning since the country began rebuilding its defence forces in 1991. Although time was limited, the speaker also answered several key questions from Course Members.

The next speaker was Lieutenant Colonel Veiko-Vello PALM, Acting Director of the National Defence Planning Department, who discussed the defence planning process. Focusing on force development, capability concepts and planning for Estonia Defence Forces 2022, the speaker emphasized the role played by a mix of professional, semi-professional (reserve) and volunteer forces, all integrated into a comprehensive approach to two planning priorities: initial self-defence, backed up by NATO collective defence.

A focus on specific short- and long-term planning considerations was provided by Lieutenant Colonel Aivar TOOM, Defence Forces, J5 Plans. This presentation afforded an overview of developments in security planning, from 1991 to date. The speaker explained the arrangements for conscription, commenting on the importance of the reserves because of the close links that they ensure between the Armed Forces and Estonian society as a whole. While total national forces are 40 thousand strong, it is the Comprehensive Approach (overall national integration), including the private sector and Estonian support to operations abroad, that reinforces the nationâs ties with NATO, the EU and the UN as critical components of defence planning.

The morning concluded with an introduction to the NATO Cooperative Cyber Defence Centre of Excellence (COE), provided by Ms Kristiina PENNAR, Public Relations Adviser. The Centre, established in 2008, is affiliated to NATO but funded and managed by the contributing nations (sponsor members). Three main priorities represent the mainstay of the Centreâs activities:

The speaker described the ârules of the roadâ for sponsoring nations, including the requirements for personnel and funding contributions. Non-NATO contributions are also received, and the Centre has agreements with private agency partners.

The formal programme for the remainder of the day centred on a visit to nearby Ã mari Airbase. Following the groupâs arrival and lunch at the base mess, Lieutenant Colonel Janek LEHISTE, Chief of Estonian Air Force A 3/5/7 (Operations, Plans and Training), briefed Course Members on the Estonian Air Force, its capabilities and the host nation support to the NATO Baltic Air Policing Mission, as well as to numerous NATO and multinational exercises.

Senior Course 124âs very useful schedule of activities in Estonia concluded with a tour of this state-of-the-art airbase, after which the group returned to Tallinn.