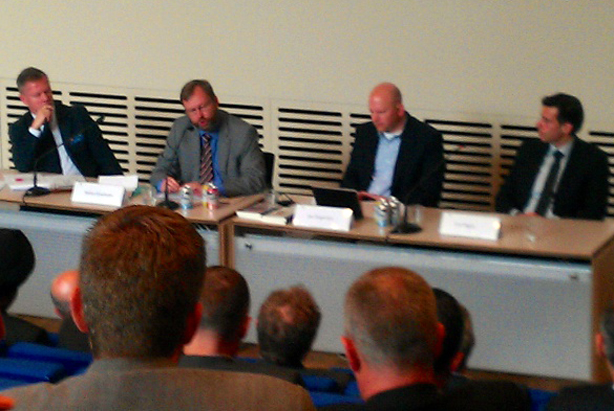 On arrival at the SNDC on Monday morning, Course Members were welcomed by Vice-Chancellor Romulo ENMARK, PhD. He provided a concise overview of how the SNDC supports Swedish defence education, training and research.

The availability of senior leaders to address the Senior Course during Field Studies is always greatly appreciated, and the talk given by General Sverker GÃRANSON, Swedish Chief of Defence, was no exception. He explained the Swedish view of the global situation today, and its correlation to the current and future planning efforts of the Swedish Armed Forces. Russian politics and recent events in Ukraine influence the political discussion in Sweden and, as in other Nordic countries, its dialogue with the Russian Federation remains open while all cooperative military exercises are suspended. The speaker highlighted the 1999 transition from conscription to professional military forces, explaining the associated challenges and opportunities. While the Swedish military enjoys a much higher degree of professionalism as a result of the change, the cost of building, maintaining and developing future requirements has required a reform of the Armed Forces which is currently in its fourth year.

Mr Mikael ANZEN, Deputy Director for Security and Policy, Ministry of Foreign Affairs, provided a lecture on Regional Cooperation in the Arctic. He defined the Arctic not only in terms of its geographical and environmental boundaries, but also in relation to political dialogue (e.g. UNCLOS). Though Sweden is a âlandlockedâ Arctic nation (with no Arctic Sea shoreline), it maintains nine icebreaker vessels that support both Baltic and Arctic Sea operations. Providing a concise history of Swedish Arctic exploration, and conflicts, the speaker transitioned to current challenges and opportunities; he also referred to the ongoing debate over national boundaries and access of non-Arctic nations to resources. Sweden participates in both the Barents Council and the Arctic Council, both of which have similar aims and interests, albeit with a different geographic focus and membership. In his conclusion, Mr Anzen noted the increasing importance of the Arctic Council as an international decision-making body.

Mr Johan LAGERLÃF, Deputy Director General and Head of Strategy and Security Policy at the Ministry of Defence, provided a security policy overview and also spoke about the impact of the ongoing crisis in Ukraine on national security concerns. His focused discussion of territorial integrity and Swedish political independence provided a sound basis for an appraisal of Swedish military reform and the resulting transition of national policy from concern with territorial defence to emphasis on international partnerships as the basis to security. The Swedish military reform, as a result of a decreasing defence budget and the continuing transition from conscript to professional forces, is creating a smaller, better equipped military. Despite this downsizing, Sweden has increased its capability to integrate its equipment and forces with NATO and regional allies, through technical interoperability and increased training and exercises (including NATO Response Force support). While Sweden maintains its principle of military non-alignment, it continues to build and reinforce relationships with both NATO and the European Union structures.

Dr Tomas RIES, Swedish National Defence College, Department for Security, Strategy and Leadership, presented an interesting lecture on Global Security and Nordic Priorities. In the speakerâs view, a rapidly degrading global security environment has combined with continuing technological and economic development to create a scenario which is readily recognized, but difficult to address. Dr Ries commented on not only the Ukraine crisis, but also the long-standing nuclear defence postures of Russia and the United States. He also emphasized the need for a credible European defence capability.

The programme concluded with a panel debate, moderated by Professor Jan ÃNGSTRÃM: this featured presentations by Eric PAGLIA (KTH Royal Institute vof Technology) and Niklas GRANHOLM (Swedish Defence Research Agency, Ministry of Defence). Mr Paglia spoke about the Arctic Council, commenting on the role of member states and observer states (as well as the extent of international interest in Arctic matters, ranging from scientific research stations and energy exploration to concern with the global implications of environmental change in the Arctic). The presence of China, Japan, South Korea and Singapore reflects the geographic spread of the twelve permanent observer states. Mr Granholm described the evolution of regional geopolitical problems resulting from climate change and human activity, as illustrated by the crowded map of declared economic zones in the Barents Sea. He concluded his presentation by citing examples of Arctic nationsâ sovereignty policing, and its applicability to strategic security.

In an official exchange of gifts at the conclusion of the programme, Brigadier General Patrick DESJARDINS, NDC Director of Academic Operations, presented a College crest to Vice-Chancellor ENMARK of the SNDC.