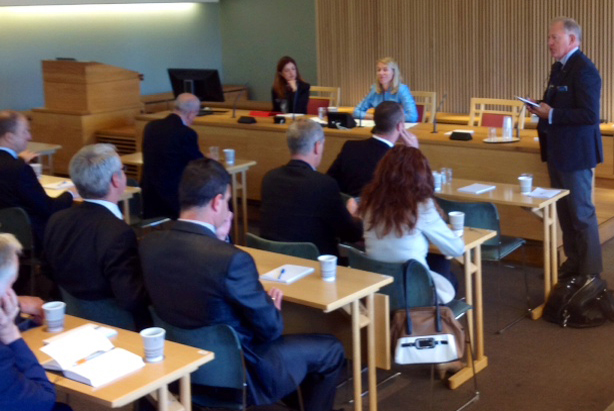 The next day, Course Members received an outstanding line-up of briefings and lectures beginning with Mr Øystein BØ, State Secretary and Deputy Minister of Defence. In his opening address and welcome, he provided an overview of Norwegian security strategy, territorial defence, the High North and Norwayâs relations with NATO. Norwegian support to NATO Allies includes training and exercises in the High North, which results in increased interoperability and greater bilateral interoperability with Nordic and Scandinavian countries through multinational training. The current crisis in Ukraine and Russian intentions figure prominently in national discussions, and a renewed focus on Article 5 and collective defence are high on the agenda. In general, there is widespread support for continuing Norway-Russia relations, but there is also backing for NATOâs decision to suspend cooperative engagements with Russia throughout 2014. Norway is looking forward to the upcoming NATO Summit and will be proposing several changes to NATOâs Military and Political constructs, the Strategic Command arrangements and the NATO training and exercise programmes.

Next, Rear Admiral Louise DEDICHEN, Commandant of the Norwegian Defence University College , welcomed Course Members to Norway and to the College, where the dayâs briefings were hosted. In her address, she stressed the importance given by Norway to gender equality and gender neutrality, and provided numerous examples from the government sector. She described the university and the courses offered, highlighting both its degree and non-degree programmes, as well as its extensive research department.

Professor Rolf TAMNES, Norwegian Institute of Defence Studies, then discussed âGeopolitics in the High Northâ. He explained Norwayâs interest in the Arctic and described global interests in the region, identifying the need for discussion and preparation as a result of the increasing activity there. In a presentation which took a historical perspective from World War I, through the Cold War to today, the speaker observed that advances in technology have enabled increased activity, both civil and military, in the North. This has resulted in increased challenges (and risks). The natural environment complicates all activities, especially emergency response, due to the current lack of infrastructure in the region. At present, the Russian Federation possesses the greatest capability and capacity for Arctic operations, in terms of facilities and daily activity. For now, the Arctic nations essentially agree on the regulatory principles for the Arctic and there is no expectation that this is likely to change in the near future; but, with projections to 2050, we can expect changes, as the effects of global warming, trends in technology and the cost-benefit ratio of resources in the Arctic will drive developments to exploit these resources.

Mr Knut HAUGE, Special Advisor, Ministry of Foreign Affairs lectured on Norwegian-Russian relations. He noted the national respect for legitimate Russian interests and cooperation with Norway, including on fishing rights, environmental protection and search and rescue. He outlined efforts to normalize Norwegian-Russian relations following World War II and stated that, although Russia has always set the pace of the relations, Norway has had more successes than failures over the years. He provided an in-depth analysis of Russian actions in the Arctic. Today, Norway is expending significant resources to develop and maintain a credible presence in the Arctic and considers that this is the best way, together with NATO and other bi-lateral agreements, to maintain stabilized relations with Russia.

The next presentation, provided by the Director General, Ministry of Foreign Affairs, Mr Rolf FIFE, covered the Law of the Sea and the High North. He described how the Law of the Sea is used as a framework for national agreements on local or regional sea traffic regulation, not only supporting global sea traffic but also covering global fibre optic networks and undersea pipelines for which the national Coast Guards are the primary enforcers. He explained the notion of continental shelf extension and the 200 nautical mile economic exclusion zones, illustrating how these are justified by nations and how they would apply according to current agreements; he also touched on the potential for conflict between Arctic nations. The speaker provided several examples of how a nations have worked out agreements on overlapping zones. He concluded his presentation with a discussion on Arctic fisheries and how they also represent another area of cooperation, as in the Norwegian-Russian cooperative agreement on fisheries management.

Director General Ole Anders LINDSETH, Ministry of Petroleum and Energy, facilitated a discussion on âOil and Gas Activities in the High Northâ. He began his presentation with the premise that, although renewable energy must continue to be developed for the future, the world demand for fossil fuels (oil, coal and gas) will continue to increase at least until 2035. Within this context, the Norwegian Petroleum Policy aims to develop petroleum exploitation as a significant portion of Norwegian exports. The potential combined reserves in the Arctic represent an economically significant source of undiscovered oil and gas. The speaker cited petroleum licensing agreements between Norway and Russia as another example of resource cooperation. He also described Norwayâs risk analysis measures in the awarding of oil exploration and extraction contracts, and the essential requirement to protect people and the environment.

The final presentation of the day was by Mr Espen STENERSEN, Deputy Director General, Department of Finance and Management, Ministry of Defence, on âThe Modernization of Norwegian Defence: From Deep Crisis towards a More Sustainable Balanceâ. He explained Norwayâs change in focus from static territorial defences prior to 2001, to a flexible and mobile defence with rapid deployment capability, for 2014 and beyond. Norway is one of a very few NATO nations with an increasing defence budget which is providing for capability upgrades, increasing training opportunities, while at the same time reforming all aspects of its total force. The speaker detailed the plan for a dedicated and nationally approved budget for F35 fighter planes to replace existing F16 aircraft and concluded with future challenges, such as the modernization of additional equipment, refining efficiency practices, and the balance between material investment and the operational budget.

The morning of 25 June brought Senior Course 124 to the Norwegian Parliament for a tour and the opportunity to interact with Ms Anniken HUITFELDT, Chair of the Standing Committee on Foreign Affairs and Defence. Following an introduction by the NATO Defense College Commandant, Ms HUITFELDT explained her position in Parliament and as Committee Chair. She extensively discussed Norwegian foreign policy, including towards the Russian Federation, and the extent of Norwegian- Russian cooperation, while respecting NATO and EU restrictions imposed after the Ukraine crisis. Following an exhaustive question and answer session with Senior Course Members, the formal programme in Norway concluded with the group departing for the airport and on to Copenhagen, their final destination on this Field Study.