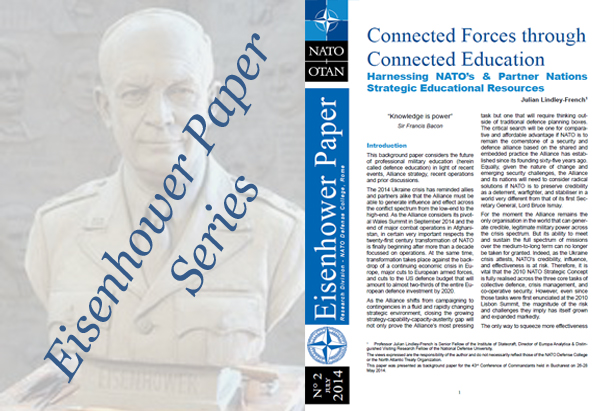 â Smaller and smarterâ. In the past decade, NATOâs Member States have mainly focussed on operations. With a shift from âNATO deployedâ to âNATO readyâ, it is of utmost importance that military leaders not only maintain their practitionerâs skills but their ability to understand the environment in which they might have to intervene. Despite resource constraints and budget cuts, initiatives are underway to avoid a loss of institutional memory. In the past two years, NATOâs Secretary General Rasmussen launched two sets of initiatives, Smart Defense and the Connected Forces Initiative, that promote deeper cooperation between Allies, including in Training and Education.

This second Eisenhower Paper by Prof. Julian Lindley-French explains how all of this unfolds among the Professional Military Education community. He addresses possible means to improve the readiness of NATOâs military and to ensure that they are better connected through intellectual interoperability. This calls for Connected Defense Education, maximizing the already existing network of military academies and colleges, between NATO Allies and partners. The purpose is to foster greater synergy between defence establishments, disseminating best practices and methods, measuring the relevance and performance of education and training, and better exploiting technology.

Advocating for a Connected Defence Education as a gateway to greater agility and effectiveness, this paper was written to serve as the background paper given to NATOâs Commandants of Defense Colleges at their 2014 annual meeting in Bucharest.