Friday 25th July was an especially memorable day at the NATO Defense College, with two major events attended by a number of distinguished guests: the Graduation Ceremony of Senior Course 124, and the Change of Command Ceremony, marking the handover of leadership from outgoing Commandant LtGen Arne BÃ¥rd DALHAUG (NOR A) to his successor MajGen Janusz BOJARSKI (POL AF), in the presence of the Chairman of the NATO Military Committee, Gen Knud BARTELS (DNK A). 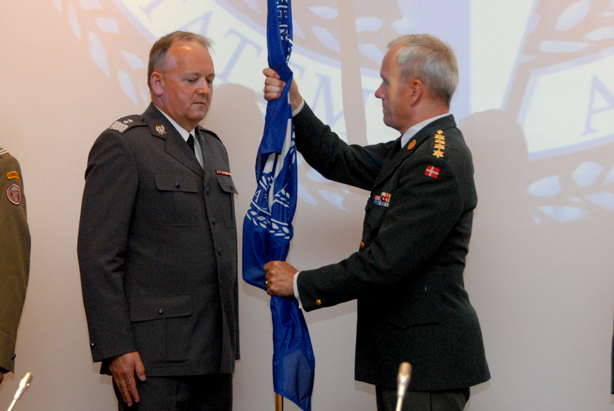 Among the dignitaries present at the NDC on this important occasion were distinguished Ambassadors of NATO nations, the Partnership for Peace (PfP), the Mediterranean Dialogue (MD) and the Istanbul Cooperation Initiative (ICI), as well as Italian Authorities. The College was honoured to welcome the Polish Minister of National Defence, Mr Tomasz SIEMONIAK, the Norwegian and Polish Deputy Chiefs of Defence, respectively LtGen Erik GUSTAVSON (NOR A) and MajGen Anatol WOJTAN (POL A). The Ceremony was also attended by NATO Military Representatives as well as representatives from the main NATO Commands.

The morning was dedicated to the Graduation Ceremony of Senior Course 124; the culminating point in almost six months of intensive study for the 78 Course Members. Among the 29 different countries represented on SC 124, 17 are NATO member states, 8 from Partner countries (3PfP, 3MD, and 2ICI), and 4 are Global Partners: Australia, Korea, Japan and Pakistan.

Following the opening speech by NDC Commandant LtGen Arne BÃ¥rd DALHAUG, Course Members, Faculty and guests listened to an inspiring address from the Chairman of the NATO Military Committee, Gen Knud BARTELS. This offered all participants an opportunity to place the unique educational experience afforded by an extended stay at the NDC within the dynamic context of todayâs rapidly evolving security challenges.

Standing before their respective national flags to receive their diplomas, Course Members were individually congratulated by Gen BARTELS and LtGen DALHAUG.

The Change of Command Ceremony took place in the late morning. In his farewell remarks to the NDC after three years in command, LtGen DALHAUG referred to the intensive institutional activities for the celebration of the Collegeâs 60th Edition of the Anciensâ Annual Conference and Seminar last October, and spoke candidly of his time here in Rome, describing it as one of the most rewarding experiences in a long and varied career at both national and Alliance levels. He illustrated the challenges the world faces today, and the role that NATO plays to stem conflict, and bring about peace. As the Allianceâs premier academic establishment, the NDC plays a crucial role in preparing military and civilian personnel for high-level security-related positions. This task, the General stated, is ânow more important than everâ. LtGen DALHAUG expressed his gratitude to all for supporting the NDCâs mission, and wished everyone present a prosperous and healthy future. The prolonged applause for LtGen DALHAUGâs final remarks expressed more eloquently than any words could, the warmth and respect he has inspired in everyone associated with the NDC.

CMC Gen Knud BARTELS then delivered the Change of Command address, expressing appreciation of the outgoing Commandantâs enormous contribution to ensuring that the College would continue to set the highest standards of commitment in its educational, research and outreach activities.

Taking stock of the increasingly complex and difficult challenges that the College â indeed, the whole of the Alliance â has to face, Gen Knud BARTELS then wished the new Commandant every success in guiding the College into its seventh decade of activity. Following the Change of Command Ceremony, with the symbolic handing over of the NDC flag, MajGen Janusz BOJARSKI addressed the College for the first time and spoke briefly of the commitments to be honoured in the coming months.

Following MajGen Janusz BOJARSKIâs address, the Polish Minister of Defence Mr Tomasz SIEMONIAK took the opportunity to congratulate the new Commandant, wishing him the best in this new endeavour.

In conclusion to the Graduation Ceremony of SC 124 and the Ceremony for the Change of Commandant, all guests were invited to a Vin dâHonneur.

Under the leadership of the new Commandant, Senior Course 125 is scheduled to start in early September, to be followed by NATO Regional Cooperation Course 12 and by another busy round of courses and seminars. Among the elements of continuity in the life of the College is its densely packed programme of activities, with the brief periods between courses providing much needed time for the behind-the-scenes work which ensures close coordination and fine-tuning of efforts.