On Friday 5 September 2014, the NATO Defense College had the pleasure of hosting General John R. ALLEN (US Marines), former ISAF Commander, who gave Senior Course 125 a Lecture of Opportunity on "The Art of Strategic Thinking in Politics". 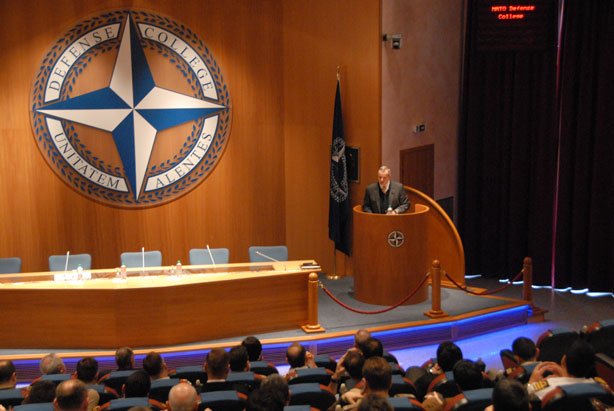 Upon arrival, the General was welcomed by NDC Commandant Major General Janusz BOJARSKI (POL F) and Dean Dr Daria DANIELS SKODNIK (SVN C). Following a brief meeting with the NDC leadership, Gen ALLEN moved to the Main Auditorium where he was introduced to Senior Course 125, faculty and staff.

Gen ALLEN began by underlining the significance of the NDCâs Senior Course for future military and civilian leaders. In his fascinating lecture, he referred to the current NATO Summit in Wales as one of the most important in NATOâs history. He commented, in particular, on an article co-drafted by the UK Prime Minister David CAMERON and US President Barack OBAMA, entitled âStrengthening the NATO Allianceâ as representing a clear example of a policy in need of a strategy and on the importance of well-defined strategic communication.

During his lecture, Gen ALLEN spoke of his personal experience in Afghanistan, with a particular focus on strategic leadership, strategic planning, the importance of information, and the many challenges posed by the different crises, as well as describing the human element in any campaign.

Gen ALLEN continues to be active in the US policy arena, and his experience is sought after at the highest levels of government. Currently, he serves as Senior Advisor to the US Secretary of Defense. He is also a Distinguished Fellow in the Foreign Policy Program at the Brookings Institute. Prior to retiring from the Marine Corps, he commanded the NATO International Security Assistance Force and United States Forces in Afghanistan, from July 2011 to February 2013.

Allenâs command of the 150,000 U.S. and NATO forces in Afghanistan occurred at a particularly critical period in the war. During his command, he recovered the 33,000 US surge forces, moved the Afghan National Security Forces into the lead for combat operations, and pivoted NATO forces from being a conventional combat force into an advisory command. Further, he established the division-sized Special Operations Joint Task Force. In the process, his forces closed or realigned over 500 bases and facilities. All of these activities were conducted in contact with the enemy, and during active and particularly intense combat operations.

Allenâs contingency and combat operations assignments included: Operation Sea Signal in the Caribbean, in 1994; Operation Joint Endeavor in the Balkans, in 1995-1996; Operation Iraqi Freedom in Iraq, from 2007 to 2008; and Operation Enduring Freedom in Afghanistan, from 2011 to 2013.