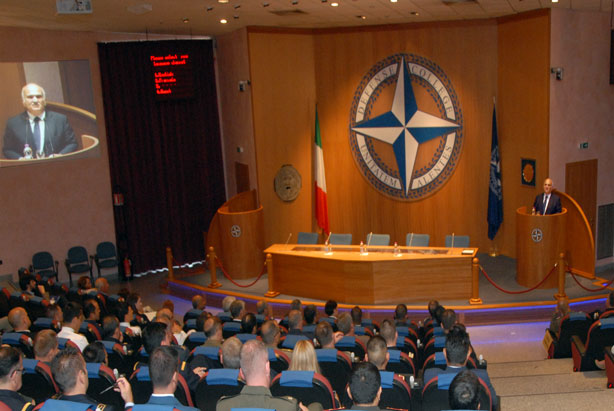 A number of Ambassadors, other diplomatic staff and representatives from the international and Italian press also attended the Princeâs lecture to SC125.

The occasion of the Princeâs visit to the College coincides with significant events on the worldâs political scene, coming, as it does, so soon after one of the most important summits in NATOâs history and following some remarkable developments in political discussions over recent days. In his Lecture of Opportunity, the Prince referred several times to the need to grant and preserve equality among men. HRH also pointed out that the existence of religions is not the main cause of problems in the world, it is rather economics and political issues which are at the source of conflict. He concluded by expressing the hope that the audience had reached the understanding that âstability is possible only by establishing human cooperation and relationshipsâ.

The 75 minute-long presentation was followed by a Q&A moderated by the Head of the NDC Middle East Faculty Col Giuseppe Morabito. After the Q&A session, NDC Commandant Major General Janusz Bojarski thanked the Prince for returning to the College for the fourth time. Above and beyond HRH willingness to discuss complex and contentious political issues, the Prince is first and foremost a "symbol of wisdom".

HRH Prince El Hassan Bin Talal is a member of the Hashemite family of Jordan, he holds a number of important awards, titles and honours. Prince Hassan is active in many forums which promote dialogue and cooperation.

HRH presence at the College was a source a great enrichment to both Senior Course Members and to the audience as a whole, which today filled the Main Auditorium to attend this unique occasion.