On Monday 22 September, the NATO Defense College in Rome had the pleasure of welcoming the twelfth NATO Regional Cooperation Course (NRCC 12). 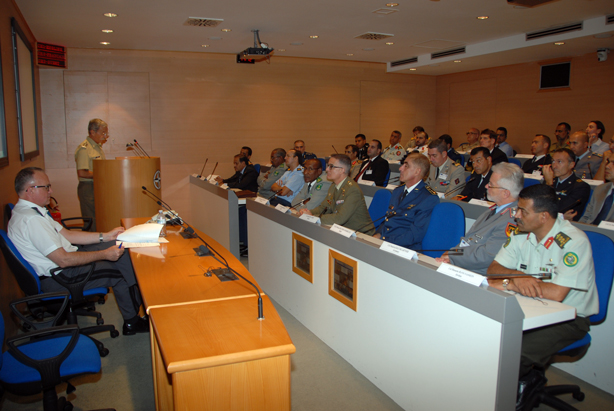 One of the NDCâs main educational programmes, the NRCC brings together participants from NATO countries, the Mediterranean Dialogue (MD) and the Istanbul Cooperation Initiative (ICI), as well as Global Partners.

The main aims of the Course are twofold: to improve understanding of global and regional security issues regarding the Middle Eastern Region, examining these subjects from the perspective of MD, ICI and NATO member countries; and to enhance knowledge on the complex issues in todayâs rapidly changing security environment.

Course Members were welcomed by NDC Commandant MGen Janusz Bojarski (POL F), as well as by the Dean, Dr Daria Daniels Skodnik (SVN C), the NDC Middle East Expert MGen Mohammad Awwad (JOR A) and the Director of the Middle East Faculty, Col Giuseppe Morabito (ITA A). MGen Bojarski underlined the importance of the NRCC as a unique opportunity for discussion, reflection and intellectual challenge. The Dean stressed the importance of giving careful and timely consideration to contemporary issues such as Isis and events in Ukraine, commenting on the close attention given to these questions both at the Allianceâs Wales Summit and, even more recently, at the NATO Military Committee Conference in Vilnius, Lithuania. Col Morabito provided details of the NRCCâs organization, objectives and programme.

The highlight of the session was the inaugural lecture by the Chief of Staff of Joint Force Command Naples and Head of the European Union Command Element, LtGen Leonardo di Marco (ITA A). He addressed political and security matters in the Mediterranean area as a whole, with a specific focus on NATOâs relations with the Middle East and North Africa, including the Gulf Region. In his conclusion, he looked at future partnership prospects in the light of agreements announced after the Summit.

LtGen di Marco was commissioned into the Italian Artillery and, following experience on the operations staff of the 3rd Missile Brigade and the Army General Staff in Rome, was appointed Chief Fire Coordination/Joint Effects Cell at the NATO Rapid Deployable Corps. He also served as Chief of Doctrine Branch on the Italian Defence General Staff, and as Chief of Staff of the 132nd "Ariete" Brigade. From 1998 to 2000, LtGen di Marco was ACOS Fire Coordination at HQ Allied Rapid Reaction Corps in Germany. After tours of duty in the Balkans, Iraq and Afghanistan, in January 2006 he took command of the Italian Army Artillery Brigade. In September 2007, he was appointed Deputy Chief of Staff Support, Supreme Headquarters Allied Powers Europe (SHAPE). From September 2010 to February 2012 he was Chief of Staff NATO Rapid Deployable Corps-Italy (NRDC-ITA) and, until the time of his current appointment, he was Commanding General of the Italian Army Simulation and Validation Centre.

This year the NRCC brings together 40 participants from 15 countries. As in recent editions of the Course, part of the curriculum will be dedicated to enhancing knowledge and understanding of the three great monotheistic religions. During the week set apart for this purpose, Course Members will visit St Peterâs Basilica (where they will attend a Papal audience), the Great Mosque of Rome and the cityâs historic Synagogue. There will also be a number of significant institutional visits during Field Study periods: Brussels (NATO HQ and Shape), Paris, Naples (AFSOUTH and the Oriental University), and Rome.

The College extends a warm welcome to all NRCC participants, and wishes them a pleasant and proficuous stay in the Eternal City.