Hot on the tail of NATO Defence College (NDC) Senior Course 125 (SC125) visit to Amsterdam the next stop was Paris. Traveling by train, the journey was just over 3 hours as the course stepped out into the sunshine at Gare de Norde. 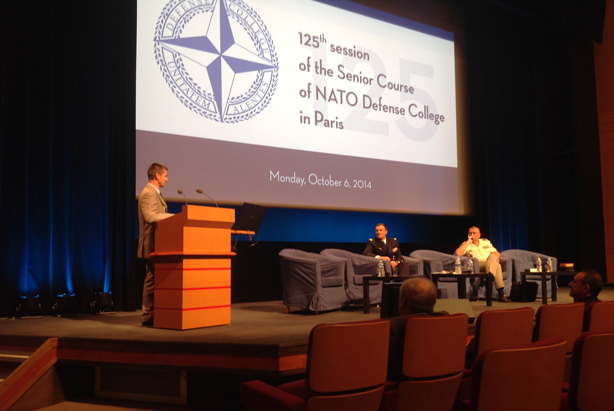 On Monday 6th October 2014, the course rose early and departed for the 'Ãcole Militaire'. SC125 was welcomed by the Chief of the International Military Relations Department from the Defence General Staff. There then followed a presentation by the Euro-Atlantic Division Director who explained the history of French involvement in NATO and the importance of returning as a full member. The French position in NATO and how it's forces are attributed to NATO was particularly useful to understand. A representative from the Ministry of Foreign Affairs outlined how international organizations are accommodated in French Foreign policy with the final presentation focusing on how France conducts its Strategic Defence Reviews - published in the 'White Book' and the mechanisms of French Budget Law in relation to forward Military Planning. The visit concluded with a Question and Answer session were a range of subjects was explored in greater detail.

SC 125 then left Paris bound for London by train experiencing 30 minutes of darkness as the Channel Tunnel was encountered. Arriving in London the Course was disappointed to find that the sun was shining!