On Thursday 16th and Friday 17th October, the NATO Defense College hosted the 61st edition of the Anciensâ Annual Conference and Seminar. 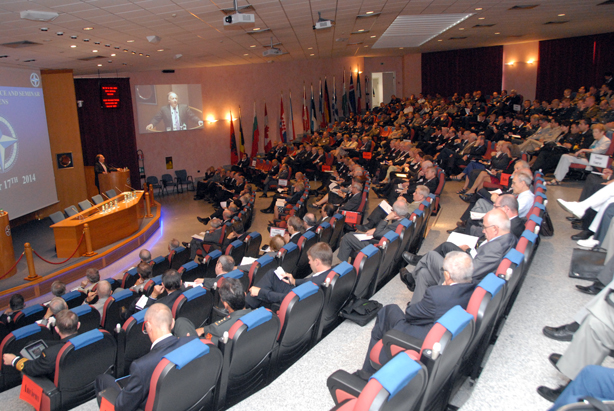 This event has been organized every year since 1954, to bring together former NDC Course Members. (The College was based in Paris in those early days, hence the traditional use of the French name âAnciensâ.) At present, the Anciensâ Association has more than 7,000 members worldwide. The fact that many of them hold national or international positions of great responsibility reflects the high educational standards set by the College, and the esteem in which it is held by Allied and Partner nations.

The Conference and Seminar not only affords Anciens an excellent opportunity to maintain contacts and friendships, but also offers them an authoritative update on issues which are currently relevant to NATO and to the international community at large.

On Thursday 16th October, a reception for returning Anciens was held at the Italian Army Officersâ Club, at Castro Pretorio.

Next morning, the Secretaries of the various National Anciensâ Associations were at the College early for their annual meeting, chaired by the Dean Dr Daria Daniels Skodnik (SVN C). This was followed by the keenly awaited Seminar, held in the Maynard-Thorn Auditorium with the current Senior Course and NATO Regional Cooperation Course also attending. All participants were warmly welcomed by NDC Commandant MGen Janusz Bojarski (POL F), who is also President of the Anciensâ Association. Then the Commandant introduced guest speakers Mr Stephen R. Covington (USA C), Strategic and International Affairs Advisor to the Supreme Allied Commander Europe (SACEUR), Prof Dr Julian Lindley-French (GBR C), Director of Europa Analytica, and LtGen (ret) Jϋrgen Bornemann (DEU A), former Director General, NATO International Military Staff. The Commandant underlined the importance of this yearâs chosen topic, âNATOâs Strategic Direction after the Wales Summitâ, in relation to the current instability in various parts of the world and the obvious interest of offering a forum for experienced Anciens to engage with future leaders on the many related challenges.

The invited speakers offered stimulating and informed perspectives on what is certainly one of the most challenging periods in recent years for the Alliance. Mr Covington focused on the need to address the Allianceâs ongoing security missions in the East (in relation to the continuing tensions with Russia) and in the South. Prof Dr Lindley-French referred to the recent Summit as the beginning of the âWales eraâ, commenting on key points highlighted in Cardiff (creation of a multinational âspearheadâ force, confirmation of the defence expenditure requirement as 2% of GDP, enhancement of exercises and training, formation of a coalition against the Islamic State). Finally, LtGen Bornemann spoke about the future of NATO, especially with regard to military capacities. He underlined that the Alliance is fully capable of managing the difficult agenda it is faced with, concentrating particularly on the core functions defined in the 2010 Strategic Concept. This was followed by a plenary discussion moderated by Dr Brooke Smith-Windsor (CAN C), Deputy Director of the NDC Research Division.

Friday afternoon was dedicated to the Annual General Meeting of the Anciensâ Association.

All attending felt that the Conference and Seminar had further strengthened ties between the Anciens and the current NDC community, providing an excellent opportunity to share and discuss state-of-the-art analyses of the priorities facing NATO and its Partners.