The President of the Republic of Poland visits the NDC

On Thursday 30 October, the NATO Defense College was particularly honoured to host the President of the Republic of Poland, H.E. Bronisław Komorowski. 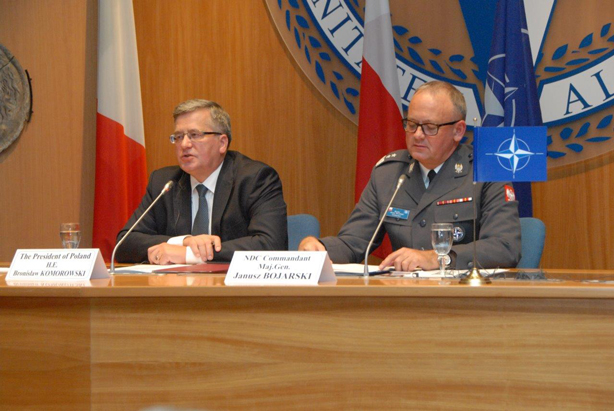 During his morning visit, the President gave a lecture in the Maynard-Thorn Auditorium entitled âStrategic adaptation of NATO to the new security conditionsâ. He stressed the need for NATO to enhance its level of commitment so as to ensure that capabilities are commensurate with current and future needs, with particular reference to Russia and to the Middle East. The talk was attended by a number of Ambassadors, other distinguished guests, journalists, as well as by SC 125, NRCC 12 and College staff. The lecture was followed by an excellent Q&A period.

Bronisław Komorowski was born in 1952 in Oborniki Śląskie, near Wrocław. He graduated from the Cyprian Norwid Secondary School of General Education No. 24, in Warsaw. He worked in the underground press, as a printer, journalist, distributor and publisher. He defended his MA thesis at the Faculty of History at the University of Warsaw. In 1977 he worked in Zespół Prasy Pax and, in 1980-1981, at the Solidarność Social Research Centre (NSZZ) in the Mazovian Region. From September 1982 he worked as an editor, for the underground magazine “ABC”. During the years of martial law in the 1980s, he taught history at the theological school in Niepokalanów. From 1989 to 1990, he was Director of the Aleksander Hall Office in the Office of the Council of Ministers.

As a result of the tragic death of President Lech Kaczyński in the Smoleńsk catastrophe on 10 April 2010, Bronisław Komorowski, as Marshal of the Sejm, became Acting President of the Republic of Poland. Three months later, he was elected President and was sworn in before the National Assembly on 6 August 2010.