On Thursday 30 October 2014, the NATO Defense College (NDC) was honoured to host the Commandant of the NATO Rapid Deployable Corps in Italy, LtGen Giorgio Battisti (ITA A). He delivered a lecture to the twelfth NATO Regional Cooperation Course (NRCC-12), directed by the Head of the Middle East Faculty, Col Giuseppe Morabito (ITA A). 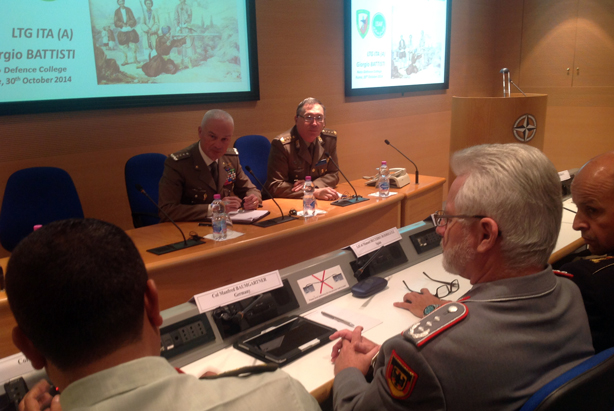 LtGen Battisti updated his audience on the situation in Afghanistan, drawing on his experience as former Chief of Staff ISAF. He spoke in detail about ISAFâs main tasks and the support it has given to Afghan security forces.

LtGen Battisti is a graduate of the 154th course at the Italian Army Military Academy, the Italian General Staff Course and Advanced General Staff Course for senior Officers. He has extensive experience both as a staff officer and an operational Commander, with a background that includes operations in coalition environments, at the tactical, operational and strategic levels. He has served in a variety of theatres, including Bosnia, Somalia and Afghanistan. From January 2013 to January 2014 he was Chief of Staff ISAF and Italian Senior National Representative. On 30 June 2011, he assumed command of the NATO Rapid Deployable Corps - Italy (NRDC-ITA). He was Deputy Head of the Italian Armyâs General Affairs Department from late 2003 to 2005, and then Head of Department until 2006. In the latter capacity, he was also the Italian Armyâs Official Spokesperson. From May 2008 to June 2011, he was Chief of Staff at the Italian Operational Land Forces HQ in Verona.

This was an exceptionally rewarding morning for Course Members. In the afternoon NRCC-12 attended another significant lecture, by former NDC Dean Dr Richard D. Hooker. Since September 2013, Dr Hooker has been National Defense University Director for Research and Strategic Support and Director, Institute for National Strategic Studies (INSS). He addressed the audience on the planning effort in support to General Allen and the U.S governmentâs counter-Isis campaign plan.

Dr Richard D. Hooker, Jr graduated from the U.S. Military Academy in 1981 and holds M.A. and Ph.D. degrees in International Relations from the University of Virginia. He also has a M.Sc. in National Security Studies. Dr. Hooker served for 30 years in the United States Army, as a parachute infantry officer. While on active duty he participated in military operations in Grenada, Somalia, Rwanda, the Sinai, Bosnia, Kosovo, Iraq and Afghanistan, including command of a parachute brigade in Baghdad from January 2005 to January 2006. His military service also included tours in the offices of the Chairman of the Joint Chiefs, the Secretary of the Army and the Chief of Staff of the Army. From 2010 to 2013, he was Deputy Commandant and Dean of the NATO Defense College in Rome. He is a member of the Council on Foreign Relations, the International Institute of Strategic Studies, and the Foreign Policy Research Council, and a Fellow of the Inter-University Seminar on Armed Forces and Society. A former White House Fellow, Dr Hooker previously taught at the United States Military Academy at West Point and held the Army Chair at the National War College in Washington, D.C. He also served with the Office of National Service, the White House under President George H.W. Bush, the Arms Control and Defense Directorate, the National Security Council during the Clinton Administration, and the NSC Office for Iraq and Afghanistan during the administration of George W. Bush.