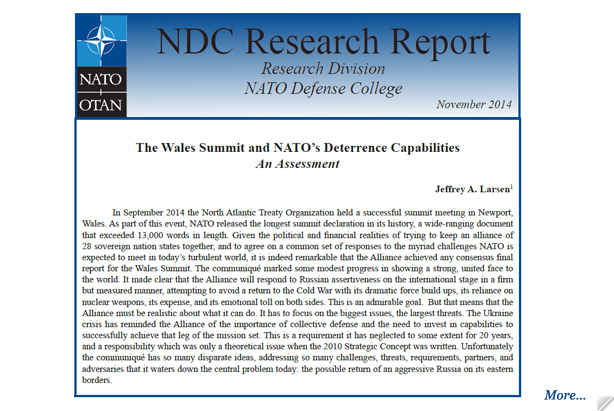 The North Atlantic Treaty Organization held a summit meeting in Newport, Wales, in September 2014. The meeting was proclaimed a success by the 28 member states, and produced the longest declaration in Alliance history, one that covers a wealth of subjects of importance to the Alliance. The central concern at this year's summit was the rise of Russian aggression against its neighbors in Eastern Europe, and NATO's response to that new threat to European security. In many ways the re-emergence of Russia actually represents an old threat, appearing to some analysts to require a re-balancing of NATO's military capabilities among the three core pillars of Alliance responsibilities: collective defense, crisis management, and cooperative security. The collective defense leg of that triad has been neglected relative to the other two pillars for some 20 years, as the Alliance has pursued enlargement, partnerships, and out of area military operations while reducing its core conventional and nuclear capabilities in Europe. Some member states, particularly those in Northeastern Europe, believe that now is the time to restore some of the deterrence capabilities that held the Soviet Union at bay during the Cold War, thereby showing a similar commitment to territorial defense to Moscow today.

This NDC Research Report addresses several areas of deterrence capabilities that were covered in the Wales Summit. It argues that while the communique announced some significant new initiatives and showed a commitment by the member states to conventional responses to Russian aggressive behavior, it also reflected an underlying hope within some member states that this crisis will pass and there will be no need to increase defense spending or return to a Cold War footing in Europe. The unwillingness to publicly emphasize the nuclear leg of NATO's appropriate mix of forces is particularly worrisome in that it may not suffice to either deter Moscow or assure NATO's members in Central Europe and the Baltic region.

We hope you find this report interesting and thought-provoking. As always, we welcome your comments and suggestions.