Arriving in Paris on 11 November, the Faculty and Course Members traveled by bus to the Langemark (German Forces) and Tyne Cot (Commonwealth Forces) Cemeteries to honour of the 100 year Commemoration of the end WWI. Course Members, along with MG Pascal VALENTIN, Director of Academic Operations, conducted wreath laying ceremonies at both locations. 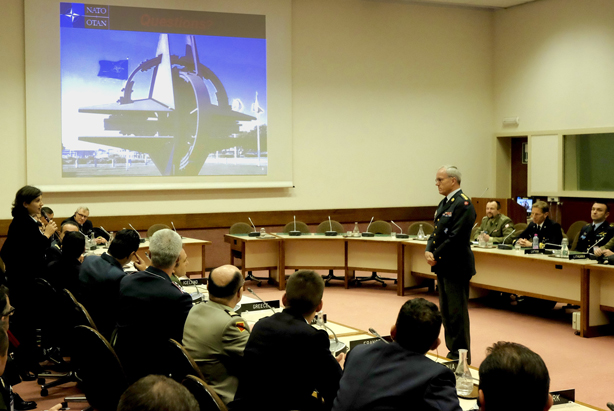 On 12 November, the delegation was received by the Belgian authorities at the Belgian Defence Staff where they were provided an overview of Belgian security and defence policy initiatives. This session was introduced by LtGen Guido ANDRIES, Assistant Chief of Staff for Strategic Affairs. He was followed by Ambassador Paul HUYNEN, Director of Security Policy at the Ministry of Foreign Affairs, who briefed Course Members on Belgian foreign and security policy.

LtCol Geert SCHOUWAERTS, from the Strategic Affairs Division, then addressed the group on national security and defence priorities. The final presentation, from Cdr Hans Huygens, staff officer within the Assistant Chief of Staff for Strategic Affairs, focused on multinational cooperation and highlighted the BENESAM cooperative agreement. Following this, all presenters supported an engaging question and answer session with Course Members.

The afternoon found the delegation at Supreme Headquarters Allied Powers Europe (SHAPE) in Mons, Belgium. Following a welcome brief from BGen Nico TAK, Director of the Comprehensive Crisis and Operations Management Centre (CCOMC), where he provided background information on the daily work of CCOMC in relation to current priorities of SHAPE, Course Member received the following interesting presentations on SHAPE activities.

The first presentation at the EU was led by BGen Heinz KRIEB, Director of Concepts and Capability Directorate, where he spoke about the role of the military in support of EU Comprehensive Approach to crisis management operations, including EUMS roles, missions and tasks and challenges occurring with consensus based operations.

The next speaker was LtCol Mikael SIKLOSI, Strategic Military Planner, Crisis Management Planning Department (CMPD), who gave a comprehensive briefing on the EUâs operations planning concept, partnership framework agreements and staff to staff cooperation with NATO and within the numerous bilateral relationships between the EU and nations.

Focusing on the EUâs civilian contribution to the Comprehensive Approach, the last dialogue of the morning was provided by Mr Herve FLAHAUT, Policy Officer, Civilian Planning and Conduct Capability (CPCC) office. Each of the presentations was followed by a challenging question and answer period.

The afternoon found the Course Members (CM) at their last location for this Field Study, NATO Headquarters in Brussels. Following a welcome and introduction by Cdr Jose HENRIQUES, International Military Staff, Operations Division and Liaison Officer to the NATO Defense College, many CM had the opportunity to have lunch with their respective NATO Delegations prior to the afternoons presentations.

The concluding briefing of this Field Study was provided by the Chairman of the NATO Military Committee, Gen Knud BARTELS (Photo). His presentation, in effect, brought together all the field study briefings as he effectively portrayed the evolution of Europe, including NATO, from 1914 to currency, the geopolitics of power and what is NATO doing today with an emphasis towards NATOs response to current Russian Federation actions.