The Deputy Commanding General of US Army Europe visits the NDC 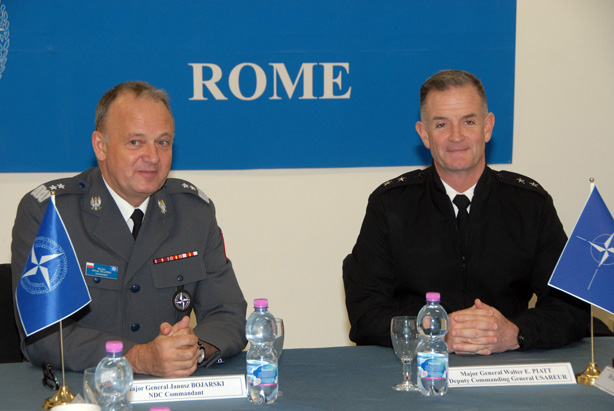 Upon his arrival, the General was warmly welcomed by NDC Commandant MGen Janusz Bojarski (POL F), with whom he spent time in discussion.

Before departing, Major General Piatt had the opportunity to meet current American Course Members who are attending Senior Course 125, and was accompanied on a tour of College facilities.

Major General Walter E. Piatt assumed duties as the Deputy Commanding General, U.S. Army Europe, and Commander, U.S. Army NATO, on 23 July 2014. MGen Piatt is originally from Somerset, Pennsylvania. He enlisted in the Army in 1979, after graduating from Somerset Area High School, and served in the Army as an Infantryman for four years. Following his enlistment, he attended Lock Haven University and graduated with a Bachelor of Science degree in Biology, commissioning as a Second Lieutenant in 1987. His military education includes the Command and General Staff College, the School of Advanced Military Studies, and a fellowship with the Institute for the Study of Diplomacy at Georgetown Universityâs Edmund A. Walsh School of Foreign Service. He holds both a Master of Science degree in Military History and a Master of Arts degree in Military Science. MGen Piatt has served in numerous assignments all over the world, including tours in Korea, Panama, Hawaii, and Alaska. He also completed several operational deployments, including Suriname, Bosnia, Kosovo, Afghanistan, and Iraq. He published two books based on his experience in Afghanistan. His General Officer assignments include serving as the 52nd Commandant of the United States Army Infantry School and Chief of Infantry, Fort Benning, Georgia; as the Deputy Commanding General â Support, 10th Mountain Division, Fort Drum, New York; and as the Commanding General of the Seventh Army Joint Multinational Training Command, United States Army Europe.