SC 125 departs Rome for Regional Field Study 3. After a short flight to Vienna, the Course enjoyed a World War I focused tour in the Austrian Museum of Military History, The Heeresgeschichtliches Museum. 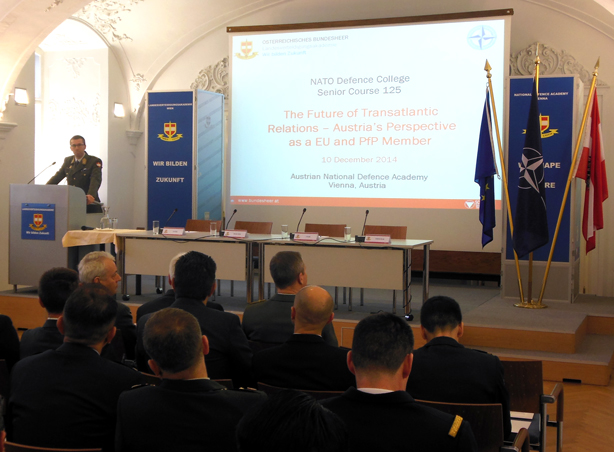 On Wednesday 10th, on arriving to the Austrian National Defense Academy (ANDA), Course Members and Faculty were welcomed by the coordinator of this visit to Austria, Col Ernst FELBERBAUER, Head of Research, Management and Cooperative Events ANDA. Our Official Welcome and introductory presentation was provided by LTG CSITKOVITS, Commandant of the ANDA. LTG Erich CSITKOVITS provided Course Members a concise history of the Austrian Defense Forces and the ANDA and how the Academy supports all facets of defense education through its multiple institutes of security studies. He detailed the ANDA close cooperation with both national and international universities on security policy and defense education.

The keynote address was provided by LTG Bernhard BAIR, Deputy Chief of Defence Staff, Austrian Ministry of Defence and Sports. LTG BAIR highlighted his presentation noting Austriaâs 20 year participation in NATOâs Partnership for Peace (PfP) Programme. He detailed Austrian Security Strategy and military and political discussion on defense matters. Discussing the militaryâs current focus on national defense, austerity concerns and the politics driving defense policy, he outlined recent Austrian armed forces contingents serving outside of Austria. Emphasizing Austrian partnering activities, including the PfP, EU and bilateral agreements, and their integration to maintain Austrian sovereignty. He concluded his presentation noting visits like this emphasize the importance of Austrian cooperation with the transatlantic link.

The final presentation consisted of a Panel Discussion. Members of the panel included Ambassador Dr. Gerhard JANDL, Austrian Ministry for Europe, Integration and Foreign Affairs, Ambassador Dr. Franz CEDE, Austrian Institute for European and Security Policy, BG Reinhard TRISCHAK, Austrian Ministry of Defence and Sports, and chaired by BG Wolfgang PEISCEL. Each panel member provided introductory remarks with Amb. JANDL focusing on the Russian Federation, the Ukraine how Austrian neutrality is influenced, Amb. CEDE discussed the history behind Austrian partnership with NATO and entry into the PfP program, Austrian support to international operations including EU mission to the Balkans and ISAF and the influence of recent Russian Federation political and military events, BG TRISCHAK discussed Austrian defence and security policy and defense cooperation with both the EU and NATO and finally BG PEISCHEL moderated the panel and presented on the transatlantic link impact on Austrian defense policy and emerging threats. Following opening comments, the panel engaged in a challenging question and answer period with the Course Members across the entire range of topics. Following the panel, the ANDA hosted a buffet lunch with the delegation having additional time to dialogue with the panel members.

The delegation then traveled to the Vienna International Centre and the United Nations Offices of the International Atomic Energy Agency (IAEA).

The first presentation at the IAEA was provided by Ms. Susanna LÖÖF, IAEA Press and Public Information Officer. Ms. LÖÖF provided an in-depth information briefing on the IAEA noting its founding in 1957 through the political dialogue regarding nuclear technology throughout the world. She highlighted the IAEA’s support to nuclear accident assistance through the Nuclear Accident Convention and concluded her presentation noting the use of radioactive material based technology, a brief history of the Nuclear Non-Proliferation Treaty and the IAEA history and management of worldwide onsite inspections.

A second presentation by Mr Thomas MÜTZELBURG, from the Preparatory Commission for the Comprehensive Nuclear-Test-Ban Treaty Organization (CTBTO) focused on the CTBTO and included an interesting demonstration on the effects of nuclear weapons detonations, the history of nuclear weapons testing (1945-1996) and concluded with 1996 signing of the Comprehensive Test-Ban Treaty (CTBT).

Each of the briefings at the UN/IAEA was complemented by lively question and answer session. Course Members then enjoyed a final evening in Vienna before a following morning movement to Slovakia.