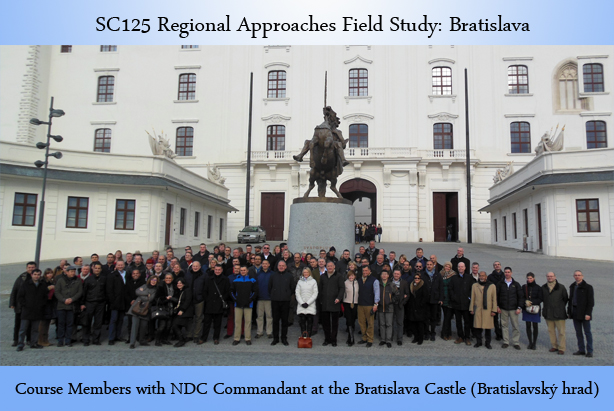 A late morning arrival to the Slovakian Ministry of Defense, the delegation was welcomed by Mr Peter SZORAD, Director General of the Defence Policy Department. He spoke on the context of the visit, regional concerns impacting Slovakian security and defence planning, membership and support to NATO and the EU. Concluding his presentation, he outlined Slovakian support to both the NATO ISAF and Operation Resolute Support missions and finished with thoughts on the NATO Summit in Wales.

Col(R) Julius DEMETRIAN, also of the Defense Policy Department provided additional clarity on Slovakian considerations following the NATO Summit in Wales and beyond and the overall Slovakian picture of the world. He outlined regional political considerations, domestic production, and how Slovakia sees itself in the international geopolitical landscape spanning 1990 to 2014. Introducing a historical context of Russian colonialism and its relationship to todayâs discussion on hybrid warfare and considerations for the NATO Readiness Action Plan and NATOâs developing Very High Readiness Task Force.

The next presentation was provided by Mr Ivo SAMSON of the Slovakian Institute for Security and Defence Studies (A research centre of the Slovak Ministry of Defence). Mr SAMSON provided a regional perspective of the current security situation in Crimea and the Ukraine as well as the perspective of Ukraine as a strategic bilateral partner. Providing the Slovak perspective on the changing face of NATO towards Russia in the past several years, he portrayed a regional interpretation on the impact of Russian Federation energy policy towards European nations and concluded with comments on the future developments of NATO in eastern nations. All presentations finished with a challenging question and answer period with the Course Members across the entire range of topics.

The final presentation was provided by Mr Miroslav MIZERA and Mr Rudolf SULIK (Photo 6 - afternoon panel 2nd and 1st from the right respectively), both Advisors to the Presidency of the Slovak Republic in the Visegrad Group, they discussed the emerging priorities of the Slovak Presidency of the Council of the European Union (EU) in 2106. They provided a context of current trends in the field of security and defence with Mr MIZERA focusing on the organization of the Council of the EU including future challenges, capitalizing on opportunities, Slovak personnel and budget considerations. Mr SULIK presented a perspective on a range of topics including energy demanding industry, digital economy, tax clusters, social inclusion, cohesion, water rights, foreign policy and security.

At the conclusion of all presentations Course Members enjoyed a lively question and answer session.

The day concluded with a reception hosted by the Slovak Ministry of Defence where the Commandant of the NATO Defense College, Major General Janusz BOJARSKI thanked Mr Mr SVETÍK for an excellent visit and their overall support to the delegation.