On 13 December, Senior Course 125 departed Bratislava for Prague, Czech Republic, the next location for tis Regional Approached Field Study. Capitalizing on an opportunity, the delegation stopped at the Austerlitz Battlefield and Memorial where Senior Course Member Col Hubert Legrand (FRA-A), provided the group a short description of events. Arriving to the Chateau Komorni Hradek Military Facility on the outskirts of Prague, the delegation had lunch in this historic and uniquely adorned location. Following lunch and arrival into Prague, Course Members and faculty were taken to an evening tour of Prague’s famous old town, the lesser town and caste district. With no scheduled activities on Sunday, 14 December, everyone had the opportunity to see and experience the sights of the city for the day. 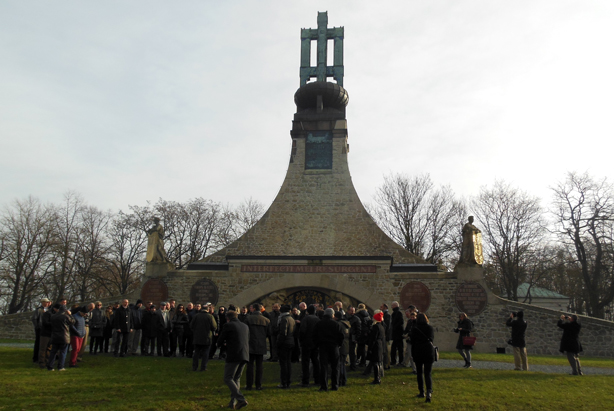 On Monday, 15 December, the delegation arrived at the DAP Hotel and House of the Army for the days presentations. Col Pavel SKALA , Czech Army and Faculty Advisor at the NATO Defense College, introduced the panel of lecturers and moderated the presentations. The delegation was welcomed by First Deputy Minister Jiri BOROVEC. The Minister officially welcomed the group to the Czech Republic and Prague and briefly discussed planning and preparation for a new era and outlined current events in the region and the impacts on Czech Military preparedness.

Mr Tomas SZUNYOG, Director of Security Policy Department, Ministry of Foreign Affairs (MoFA) provided the first presentation. Mr. SZUNYOH discussed the differences in the framework architecture of security policy efforts between MoFA and Ministry of Defense (MoD). Discussing Czech National Security Strategy from its origin in 2001 to the current 2011 version and the tasking of the National Security Council to update the document based upon emerging security concerns. He outlined national plans for incremental increases in defense spending from the current budget through 2030 noting the important, but challenging, commitment to national, regional and NATO.

Mr Josef OPLUSTIL, Deputy Director of Defense Policy and Strategy Division, MoD led the next presentation. He presented a historical perspective of Czech Defense Policy from the 30 Years War to the present. Also discussing the 2011 National Security Strategy and the current work on its revision, he described the long term defence outlook and Czech Armed Forces development concepts. Noting that by law, the Czech Parliament must approve the deployment of any Czech Armed Forces, he described its implications to NATO, the EU and the Visegrad Battlegroup. Mr OPLUSTIL described defence cooperation efforts including NATOâs Smart Defense and the EU Pooling & Sharing concepts and concluded his presentation outlining Czech Military force deployment planning and priorities.

General Petr PAVEL , Chief of the General Staff (CHoD) provided the final presentation. He congratulated the Course Members on nearing completion of the Senior Course and specifically welcomed the NATO Partners in the delegation. Gen PAVEL spoke across the range of Czech Military considerations from the fight against terrorism to the Czech legislative framework and strategic security documents. He outlined CZE Defense Strategy, Armed Forces Functioning Principles and international commitments in support of NATO, EU, OSCE and the UN. He finished his presentation describing modernization plans for military forces, challenges confronting the military and the ever increasing public support for Czech Military.

At the conclusion of each presentation Course Members enjoyed a lively question and answer session. The day concluded with a hosted lunch by the Slovak Ministry of Defence where the Commandant of the NATO Defense College, Major General BOJARSKI thanked General PAVEL for his continued support to the NATO Defense College and excellent support to the delegations visit to the Czech Republic.