An evening arrival to Amman, Jordan on 17 December brings Senior Course 125 to the final leg of their Regional Field Study program. The next morning, the delegation traveled to the Royal Jordanian National Defense College (RJNDC) to begin the days presentations. The group was welcomed by Brigadier General Mahnoud ALMATAR, Commandant, RJNDC who introduced the college and provided an overview of activities. 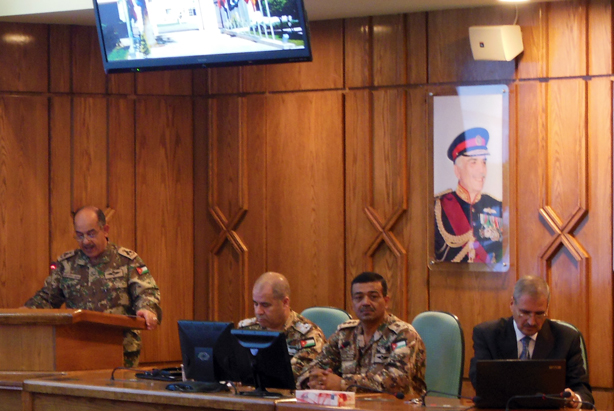 The first presentation of the morning was provided by His Royal Highness Prince Rashid bin EL HASSAN. Also a Lieutenant Colonel in the Jordanian Armed Forces, HRH Prince EL HASSAN is a Commander of Gendarmerie and also an Ancien of the NATO Defense College Senior Course 121. He spoke about Jordanian Internal Security Policy as it relates to organized crime, counter-terrorism and the challenges associated with the significant number of refugees currently residing in Jordan.

Brigadier General Nasri ABIDAL, also of the RJNDC, provided a concise briefing on the RJNDC strategic vison, mission, organization and an overview of curriculum.

Major General (Retired) Hamad ALHUNAITY, Research Faculty at the RJNDC, provided the final presentation at the RJNDC, speaking on the regional impact of the Islamic State in Syria and the Levant (ISIL). Providing the Jordanian perspective on the evolution of ISIL, and the strategic implications of ISIL controlled territory in both Syria and Iraq. He outlined the impact of varying National and International Organization policies towards the region and concluded with Jordanian policy pertaining to ISIL including use of force and the counter messaging campaign.

The delegation departed the RJNDC enroute to the Jordanian Institute of Diplomacy and a briefing from His Excellency the Foreign Ministry Secretary General, Ambassador Mohammad Tayseer BANI YASSIN. H.E. BANI YASIN also welcomed the delegation to Jordan and began his presentation speaking on the regional challenges of a stable Jordan in the middle of conflicts. He described the conflicts in the mid-east as a multidimensional and challenging situation with many potential consequences. Outlining both Jordanian policies and its practice of regional and international cooperation to achieve a peaceful endstate he described the challenges with Syrian, Iraq, the Palestinian concern and finally terror organizations in the region including ISIL. He concluded his presentation discussing the economy of Jordan where the availability of fresh water and energy imports as the two primary economic concerns with both under significant strain from the refugee situation.

At the conclusion of each presentation Course Members enjoyed a lively question and answer session.

Senior Course 125 concluded the Field Study with a visit and guided tour of the historical site of Petra, Jordan. Its designation as a UNESCO World Heritage Site is well suited and the delegation enjoyed this highlight to the successful conclusion of the course field study program.