On 6th February 2015, the NATO Defense College (NDC) celebrated the graduation ceremony of Senior Course 125 (SC 125). With 68 high-ranking participants from 27 different countries graduating, this major event was attended by Course Membersâ families as well as the College Flag Officers, Faculty and Staff. 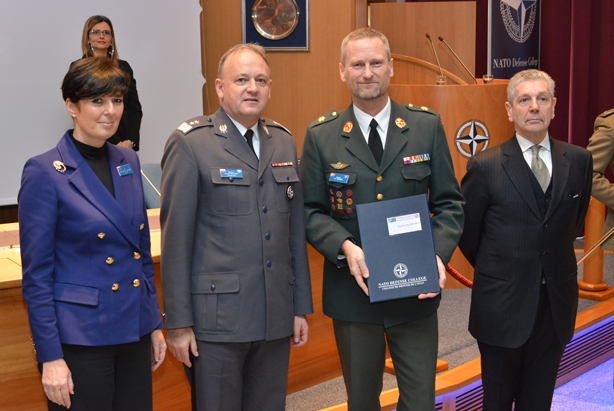 Nations represented on SC 125 include seventeen NATO Member States, three countries from the Partnership for Peace, four from the Mediterranean Dialogue and one from the Istanbul Cooperation Initiative, as well as two Global Partners.

The guest of honour was Admiral (ret.) Giampaolo Di Paola, former Italian Minister of Defence and Chairman of the NATO Military Committee, whose participation on occasions like this is always a source of inspiration for Course Members as they look ahead beyond their graduation. During his career, Admiral Di Paola played a significant part in ensuring the successful implementation of historic decisions on such important questions as the Italian contribution to the NATO initiative in Kosovo, the Allianceâs enlargement and its Outreach policy; he also held positions of responsibility on operations conducted in Afghanistan, Iraq, the Balkans, the Mediterranean, Pakistan and (under the aegis of the United Nations) in Lebanon.

Distinguished guests arriving at the College at the start of the day were warmly welcomed by the NDC Commandant, MGen Janusz Bojarski (POL AF), and the Dean, Dr Daria Daniels Skodnik (SVN C). Various Ambassadors and Military AttachÃ©s, together with Italian civilian and military authorities, honoured the occasion with their presence.

The Commandant congratulated the Course Members on having successfully completed five months of intensive and demanding study, including a very full Field Study programme. He underlined the relevance of the insights acquired in discussing regional and world issues with authoritative speakers from both the academic and professional spheres, this plurality of viewpoints being an essential feature of Senior Courses. In this respect, among the most memorable lectures and presentations during the current Senior Course were those by Gen (ret.) John Allen, on âThe art of strategic thinking in politicsâ; HRH Prince El Hassan Bin Talal of Jordan; the President of the Republic of Poland, Bronisław Komorowski, on âStrategic adaptation of NATO to the new security conditionsâ; and OSCE Secretary General Amb. Lamberto Zannier, on âCurrent European security challenges and the role of the OSCEâ.

Following his speech, the Commandant asked the audience to stand and observe a minuteâs silence to honour the victims of the horrific situation in the Middle East and, in particular, the Jordanian pilot brutally murdered by terrorists earlier in the week.

The graduation address was then delivered by Admiral Di Paola, who highlighted the interest of the various Study Periods completed by Course Members on current and emerging challenges for the international community. Particularly inspirational were his remarks on the unique contribution of the NDC to multicultural understanding and its role as a forum for discussing international affairs, geopolitical strategic thinking, as well as global and regional security challenges. As the Allianceâs premier academic establishment, the true value of the NDC lies in its reasoned approach to the prevention and resolution of crises by dialogue, and by the promotion of peace through shared perspectives and partnership. Finally a short video, produced by the NDC Public Affairs Office and outlining some of the key moments in Course Membersâ stay at the College, was presented by the Chief of the Public Affairs Office, Lt Col Alberto Alletto (ITA A).

The centrepiece of the graduation ceremony, and in a sense the culmination of the entire Course, came when Course Members were called forward individually to stand by their respective national flags and receive their diplomas for successfully completing the Course.

As Course Members received the personal congratulations of Adm. Di Paola, the Commandant, the Dean and the Flag Officers of the College, this fitting conclusion to the Course was warmly accompanied by the applause of family members.

With SC 125 now ready to bid farewell to the College, SC 126 is scheduled to commence on 24th February.