On Friday 27 February, the NATO Defense College had the great honour of hosting NATO Secretary General Jens Stoltenberg, who addressed NDC Faculty and Staff together with SC 126 and a number of distinguished guests. 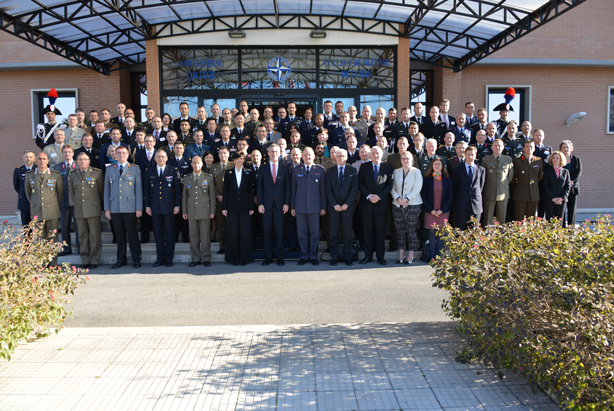 He is currently on an official two-day visit to Rome, where he has spent time with the newly elected Italian President, Sergio Mattarella, Prime Minister Matteo Renzi, the Minister of Defence and the Minister of Foreign Affairs.

On arriving at the NDC, Secretary General Stoltenberg and his delegation were warmly welcomed by the NDC Commandant, Major General Janusz Bojarski, and the Dean, Dr Daria Daniels Skodnik. After introductory remarks in the Maynard-Thorn Auditorium by MajGen Bojarski, the NATO Secretary General gave an inspiring lecture to a large and attentive audience.

In his lecture, the Secretary General focused on the ways in which the Alliance is adapting so as to face serious new security challenges on its eastern and southern flanks. He spoke in detail of the need to strengthen collective defence and enhance cooperation with all NATO partners.

He acknowledged the vital contribution made by the NDC in terms of the all-important factor known as human interoperability, in which the reciprocal understanding and shared knowledge acquired through strategic-level education provide immeasurable added value. In this respect, the Secretary General was firm in his conviction that âif we are to face up to the challenges of the day, then we not only have to act together, we must also learn togetherâ.

In thanking the Secretary General for his memorable address to the College, and for an excellent Q&A session with SC 126 immediately afterwards, we very much hope that this rare opportunity will be shared by other Course Members in the coming years.