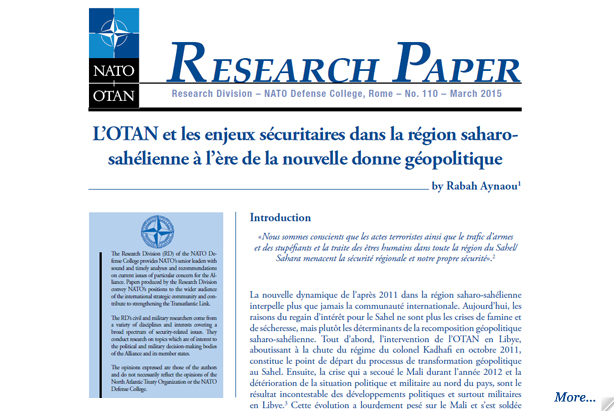 The Sahel-Sahara region crystallizes all the security challenges facing NATO members. Security concerns in the Sahel-Sahara, North Africa and Europe are inextricably linked, civil war has erupted in Libya, and a crisis continues in Mali. In addition, the proliferation of different forms of trafficking and the growing power of terrorist groups in the Sahel-Sahara area have far-reaching implications.

This unstable environment is, in many ways, a direct threat to the security of the citizens of NATO countries. The southern borders of Europe are increasingly under threat. The sequence of events in the Sahel-Sahara region since 2011 has made it a sanctuary for terrorist activities and other forms of crime. The ongoing crisis in both Mali and Libya highlights, more than ever, the political, military and economic fragility of the various states in the region. The âcloningâ of terrorist groups (e.g., al-Qaida and the Movement for Oneness and Jihad in West Africa) aggravates such problems.

The relativity of the concept of sovereignty in this area requires that NATO consider new approaches to cooperation. Regional and subregional stabilization depends above all on the recognition of the Allianceâs legitimacy in the region. A successful stabilization mission in Libya and serious consideration of the benefits to be gained from non-military alliances will be the basis for this. Such a process can enable the Alliance to contribute effectively to stability beyond its own southern borders, and will benefit from the various opportunities offered by cooperation with the various actors in Africa. Initiatives of this kind will be crucial in the process of regional and subregional stabilization.