Lecture of Opportunity by the Ambassador of the Islamic Republic of Afghanistan to Italy, H.E. Zia NEZAM.

On Friday 13 March 2015, the NATO Defense College (NDC) was honoured to receive H.E. Zia Nezam, the Ambassador of the Islamic Republic of Afghanistan in Italy with his Defence AttachÃ© Col Mohammad Asef Azadi. 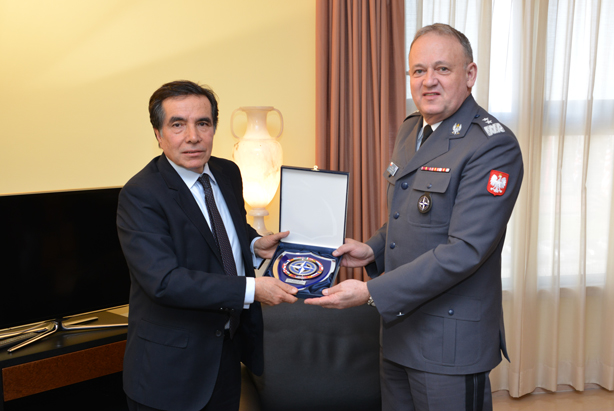 Upon arrival, the Ambassador and his Defence AttachÃ© were warmly welcomed by NDC Commandant MajGen Janusz Bojarski (POL F) and were updated on College activities during the office call with the Commandant. They were then extensively briefed by Dr Jean-Loup Samaan (MEF) on the goals and activities of the NDC.

Addressing the members of the thirteenth NATO Regional Cooperation Course (NRCC-13) in a lecture entitled âAfghanistan ajournÃ©eâ, the Afghan Ambassador offered an exhaustive overview of the political, economic and social situation of the Afghan State 13 years after the fall of the Taliban regime. H. E. Zia Nezam underlined the progress achieved and the efforts made in governance and social development in the region, emphasizing the important role of NATO and coalition forces in helping Afghanistan to build democratic institutions.

The Ambassador also discussed the challenges that Afghanistan still faces, which represent the main threats to the country.

H.E. Dr Zia Nezam has been Ambassador to Italy since 2012. Previously, he served as Senior Advisor in the Ministry of Foreign Affairs from 2010 to 2012, and as Ambassador to the Kingdom of Belgium from 2007 to 2010, where he also covered the position of Chief of the Afghanistan Mission to the European Union, non-resident Ambassador to the Kingdom of the Netherlands, the Grand Duchy of Luxembourg, and the Hellenic Republic, and was responsible for relations with NATO.