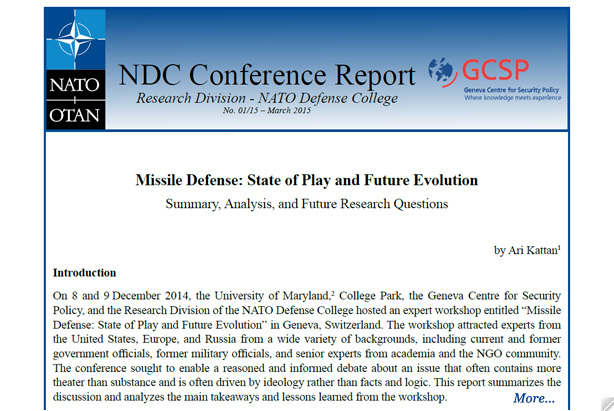 In December 2014 the University of Maryland-College Park, the Geneva Centre for Security Policy, and the Research Division of the NATO Defense College hosted an expert workshop entitled âMissile Defense: State of Play and Future Evolutionâ in Geneva, Switzerland. The workshop attracted experts from the United States, Europe, and Russia from a wide variety of backgrounds, including current and former government officials, former military officials, and senior experts from academia and the NGO community. The conference sought to enable a reasoned and informed debate about an issue that often contains more theatre than substance and is often driven by ideology rather than facts and logic. This report summarizes the discussion and analyses the main takeaways and lessons learned from the workshop.

Among the topics covered were the current state of play of missile defences, technological developments, case studies of actual missile defense use in conflicts, and the political aspects of NATOâs new missile defense system in Europe. It was clear from the workshopâs discussions that many questions about the future of missile defense and its impact on arms control, nonproliferation, extended deterrence, and crisis stability remain unexplored, let alone unanswered, by governments and the wider policy community. This meeting was an important step in bringing some of these questions to light and fostering the relationships that will be necessary for collaborating on the missile defense portfolio, both now and in the future.