Conference Report: "Ukraine and its Neighbourhood - How to Deal with Aggressive Russia" 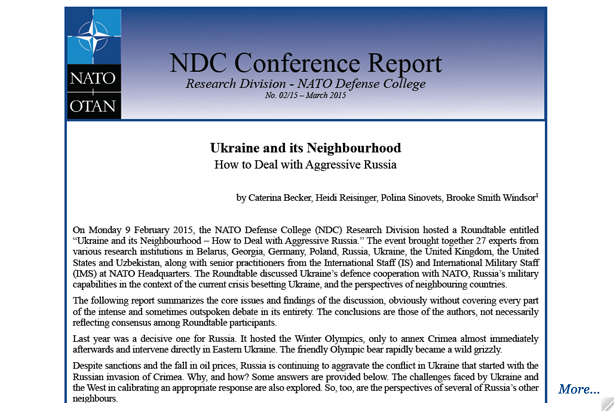 For quite some time Russia has been considered a âdifficult partnerâ for NATO, but 2014 was a particularly defining year. NATO has to adjust itself to this new situation. After the unlawful annexation of Crimea - the boldest land grab by a European power since World War II â and Moscowâs covert invasion of Eastern Ukraine, Russia has become an increasingly isolated and unpredictable actor. The Kremlinâs need for âbuffer statesâ turns more and more into a threat, especially to Russiaâs neighborhood â or its âsphere of influenceâ as Moscow likes to see it. Russiaâs only new allies seem to be the breakaway Georgian republics of Abkhazia and South Ossetia, with whom Moscow signed a wide-ranging alliance this week.

The latest NDC Conference Report, based on the findings from a workshop our division hosted in Rome in February 2015, asks whether Russia really is a military threat, how this is perceived in its neighborhood, and why it is so challenging for the Alliance to support a partner at war. I hope you find it stimulating reading.