On Tuesday 24th March 2015, following the âItalian Dayâ in Rome, Senior Course 126 (SC 126), accompanied by Director of Academic Operations MGen Pascal VALENTIN, deployed to Berlin as part of its first Field Study (FS1). The Field Studies programme, as an essential part of the NDC's academic curriculum, is designed to consolidate and enhance Course Membersâ knowledge through briefings, lectures and question and answer sessions in the various capital cities visited, the focus being on national security, defence and foreign affairs policies. In particular, FS 1 is aimed to provide Course Members with a European and Partnership perspective. 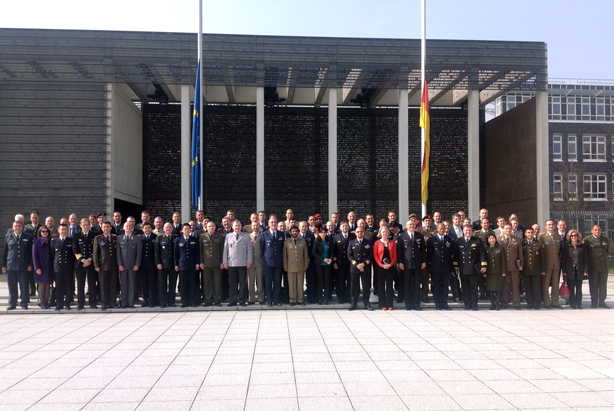 On Wednesday 25th March 2015, at Berlin's Federal Ministry of Defence, SC 126 together with the thirteenth NATO Regional Cooperation Course (NRCC-13) were welcomed by Brigadier General Carsten BREUER, Director of the Security Policy Division at the Federal Ministry of Defence. He presented a detailed initial overview to explain the context of German security and defence policy, strategic documents, the Defence White Paper, the consequences of the Wales Summit and security challenges of the European Union.

The second briefing, entitled âGerman Commitment to Multinational Operationsâ, was presented by Rear Admiral Thomas JUGEL, Deputy Director-General for Strategy and Operations. Deployments within systems of mutual collective security (UN, NATO and EU), the involvement of the Parliament in sending troops abroad, current contributions, the nature of deployments, the Comprehensive Approach, multinational operations, strategic requirements vs resources, and cyber and hybrid warfare issues were covered in detail.

Both the morningâs briefings were followed by productive Q&A sessions.

After lunch, the NDC delegation walked to the Bundeswehr Memorial. The group was met by a member of the Federal MoD Visitors' Service, who provided historical explanations about the monument. Subsequently, Course Members moved to the Paul-LÃ¶be-Haus (the legislative building where the parliamentary committees have their offices). Here, they were welcomed by parliamentarian Peter BEYER, a full member of the Bundestag Foreign Affairs Committee, who briefed the NDC delegation on German foreign policy. The briefing was followed by a valuable Q&A session, for which the speaker was joined by Dr Ute FINCKH-KRÃ MER, another member of the Bundestag Foreign Affairs Committee.

The visit to Berlin afforded a unique opportunity to better understand current and emerging strategic issues from the German perspective.