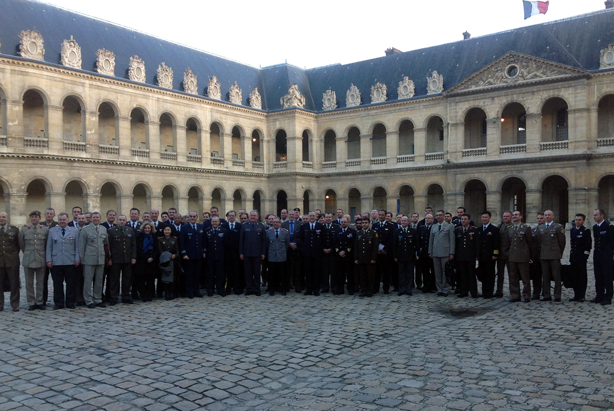 The opening speech was delivered by Major General Hugues DELORT-LAVAL, in charge of International Military Affairs at the Joint Staff. He briefly presented the role of France in NATO and other strategic frameworks, and spoke about the main strategic challenges the Alliance is currently facing.

This address was followed by three detailed talks, each followed by very productive question and answer sessions.

The first lecture, entitled âThe Joint Staff's Perspective on NATO issuesâ, was presented by Rear Admiral Patrick CHEVALLEREAU, Head of the Euro-Atlantic Division at the Joint Staff and an Ancien of SC 101. He covered many relevant issues in detail: the evolution of the relationship between France and NATO, the French perspective on NATO and the EU, Franceâs security posture and main contributions to multinational operations, the reasons for its reintegration into the military structure of the Alliance, the importance of the southern flank to France, the crucial role of nuclear deterrence and national strategic autonomy, and the significant outcomes of the Wales Summit.

The next lecture, delivered by Rear Admiral Jean-Philippe ROLLAND , Head of Department Capability Planning, Joint Staff, dealt with Franceâs 2013 White Paper and Military Programme Act, as the framework for the current organization of the French Armed Forces. A number of significant issues were clearly introduced: the commitment to maintaining participation in missions, the Armed Forces Model 2020, geostrategic priorities, and future prospects.

Mr Emmanuel COCHER, Deputy Director of the Strategic Affairs, Security and Disarmament Department at the Ministry of Foreign Affairs and International Development, then took the floor to explain Franceâs foreign policy and commitments to international organizations. He commented extensively on national interests, the role of France as an active player in the international arena, the concepts of legitimacy and governance, and the importance of multilateral organizations in French foreign policy.

After the lectures, SC 126 attended a lunch in the Military Governor's lounge, where MGen BOJARSKI expressed appreciation for the excellent programme and hospitality.