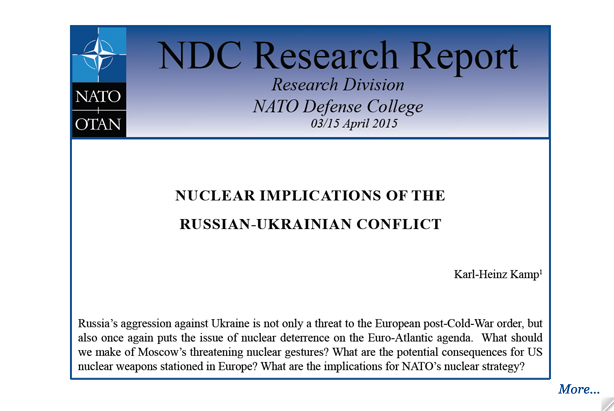 The latest NDC Research Report raises several important questions that arise as a result of Russiaâs aggression against Ukraine. Such behavior is not only a threat to the European post-Cold-War order, but also once again puts the issue of nuclear deterrence on the Euro-Atlantic agenda.

The author, Dr. Karl-Heinz Kamp, asks what should we make of Moscowâs threatening nuclear gestures, what the potential consequences for US nuclear weapons stationed in Europe might be, and more generally, what the implications are for NATOâs nuclear strategy. As Kamp points out, after the fierce debates on the future of US nuclear weapons in Europe in 2009, NATO was remarkably quick to take the issue off the agenda. The 2012 Deterrence and Defense Posture Review proved to be a compromise all sides could live with. The ânuclear dogâ that had been briefly awoken was put back to sleep. But Russiaâs expansionist policies in Eastern Europe have profoundly changed the international security landscape, and are also likely to wake up the nuclear dog again. Hence, NATO will have to restart the debate in order to reassess the role of nuclear weapons in its deterrence posture. The author concludes that the only adequate solution for the Alliance is to forge a comprehensive consensus which includes NATOâs conventional capabilities, its missile defence capacities, and its nuclear forces (in Europe and in the United States) as well as a coherent nuclear strategy.