Research Report: "An End-of-Time Utopia: Understanding the Narrative of the Islamic State" 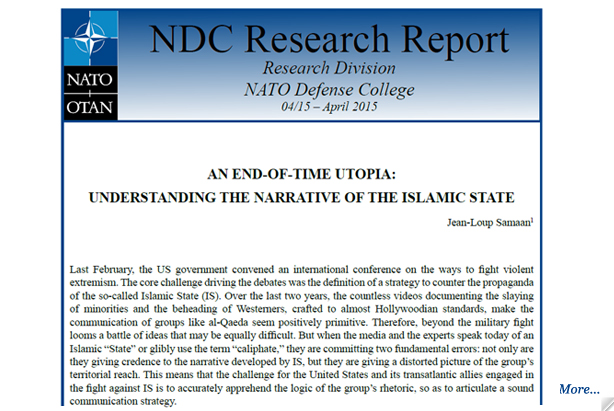 Last February, the US government convened an international conference on the ways to fight violent extremism. The core challenge driving the debates was the definition of a strategy to counter the propaganda of the so-called Islamic State. Beyond the military fight looms a battle of ideas that may be equally difficult.

The Islamic âStateâ (al Dawlat al Islamiyah) in question is a self-contrived Utopia, based on an eschatological vision. While the reality of the project can be cast in doubt, its rise is based not only on territorial conquests, but also on efficient use of a geopolitical imaginary which gives the movement its impetus.

In this perspective, the new research report from the NATO Defense College specifies the narrative of the Islamic State. It sets out to deconstruct its geopolitical imaginary by relying on the speeches and statements from its leadership as well as on its various propaganda documents (including maps and pictures). Understanding this imaginary is not only bound up with grasping the movementâs interpretation of the sources it quotes, but is the key to better understanding its messianic agenda and its seductive appeal for the young people prepared to join the jihad. Of course, this must ultimately provide the basis on which a successful counter-narrative can be built.