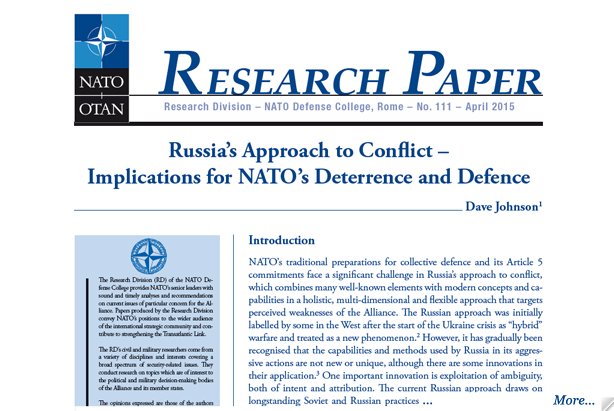 In this paper, the author (a senior member of the International Staff at NATO Headquarters) makes the point that NATOâs traditional preparations for collective defence and its Article 5 commitments face a significant challenge in Russiaâs approach to conflict, which combines many well-known elements with modern concepts and capabilities in a holistic, multi-dimensional and flexible approach that targets perceived weaknesses of the Alliance. He argues that the Russian approach was initially labelled by some in the West after the start of the Ukraine crisis as âhybridâ warfare and treated as a new phenomenon. However, it has gradually been recognised that the capabilities and methods used by Russia in its aggressive actions are not new or unique, although there are some innovations in their application. One important innovation is exploitation of ambiguity, both of intent and attribution.

Contrary to NATOâs aspirations toward a constructive relationship, Russia almost certainly views itself as being in a conflict with âthe Westâ at a level short of openly declared war. Among the many serious implications of this state-of-play are the requirement to build comprehensive situational awareness from the tactical to the decision-making level; to adapt and enhance NATO indications and warning capabilities; to re-focus and enhance intelligence efforts; to adapt practices and procedures to cope with fast-developing situations; and to establish close practical cooperation with the European Union and other relevant organisations that may play complementary roles in responding to hybrid threats.

The pattern that has emerged over the last several years of Russian aggression on its borders requires that NATO take steps to ensure its own defence. The Wales Summit decisions to implement the Readiness Action Plan and the Defence Investment Pledge are vital steps in that direction. But a clearer focus on Moscowâs clear doctrinal statements in the context of its overall pattern of behaviour will help the Alliance to focus those efforts more effectively and to adapt further as necessary. Without a full appreciation of the conceptual elements of the Russian approach to conflict, as John G. Hines and George F. Kraus wrote nearly 30 years ago in an earlier era of high tensions between the Alliance and its aggressive neighbor to the east, NATOâs Allies could âbe in danger of losing our edge, if not the competition, because we have been outflanked in the area of strategic and operational thinking.â