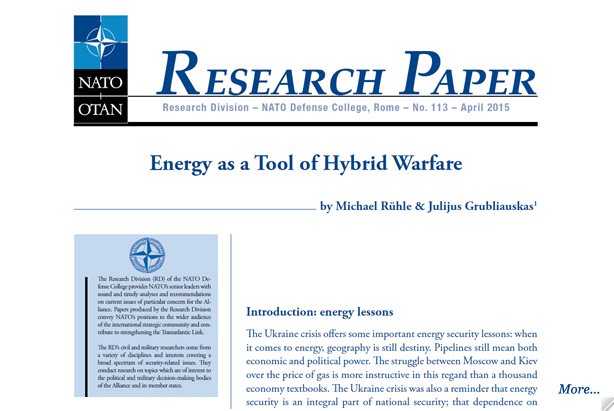 The latest NDC Research Paper, written by two officials at NATO Headquarters, reinforces the truism that when it comes to energy, geography is still destiny. Pipelines still mean both economic and political power: the struggle between Moscow and Kiev over the price of gas is more instructive in this regard than a thousand economy textbooks. The Ukraine crisis was also a reminder that energy security is an integral part of national security; that dependence on Russia can be a strategic liability; and that interdependence between the producer and the consumer will not encourage stability, as long as the producer can go longer without revenue than the consumer can go without gas.

As a single state and managed democracy, Russia controls the whole array of available strategic tools to achieve its goals. By contrast, the West has to negotiate a common position not only among many states but also among different institutions. This asymmetry will always work to the initial advantage of the aggressor. Whether it will still work in the longer run is less clear, however.

If NATO wants to be serious about countering hybrid threats, it must include energy in the equation. This will require NATO to enhance discussions on the security implications of energy issues, and step up Allied political dialogue and strategic analysis in line with the emerging environment. The authors provide six recommendations for the Alliance as it tackles this challenge.