NATO Defense College Senior Course 126 departed Rome on 3 May 2015 and landed in New York City (NYC) to begin their second Field Study. Arriving at Newark International Airport, faculty and Course Members (CM) were welcomed by our hosts, for the US portion of the field study, the US Marine Corps Special Projects Directorate team led by Capt John âColtâ Dickman. Upon arrival at the hotel on NYCâs famous Times Square, both CMs and faculty shook off the sleepiness of the transatlantic flight and headed out to take advantage of the sights. 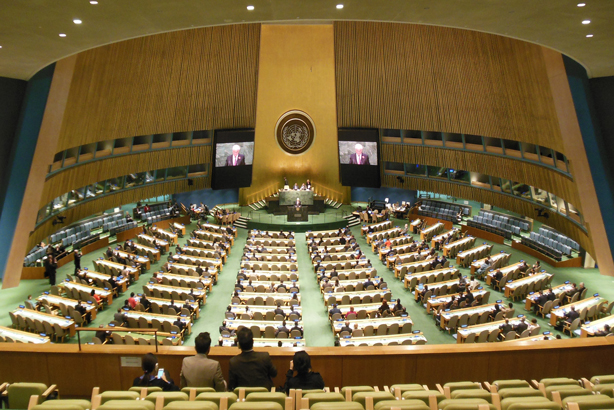 Arriving the next morning at the United Nations (UN) complex, the delegation received a tour of the UN facilities including the General Assembly and Security Council chambers. Following the tour, Col Kim Bruno Peterson and Ms Eirini Lemos-Maniati, the NATO Military and Civilian Liaison officers to the UN, welcomed everyone and began the briefings of the day. Together, they provided a briefing on NATO-UN cooperation, including policy, exercises, and military operations. They outlined recent developments in UN-NATO interaction and finished the discussion by focusing on practical ways of enhancing cooperation and dialogue between the two organizations.

The next presentation was given by Mr David Haeri, Director Policy Evaluation and Training Division, who spoke about the future of United Nations Peacekeeping. He outlined the program, which currently has 120,000 deployed members covering 16 operations around the world, each with its own unique mandate and security concerns. These forces, composed of civilian, military and police elements, are integrated into comprehensive operations. He highlighted the importance of protecting civilians, while ensuring UN operations minimize their impact on civilian populations. He discussed capabilities planning, partnerships between military support structures, as well as international organizations being the key to interoperability and concluded his presentation by describing recent developments in information sharing among interested parties, such as UN missions that support national and international organization program development for displaced civiliansâ support, and gender integration.

The next presentation by Mr Wallid Musa Abdelkarim, Director of Somalia Desk, Department of Peacekeeping Operations (DPKO), reported on the UNâs continuing engagement in Somalia over the past nine years. The UN mandate currently focuses on three pillars: political reform, military assistance and an arms embargo. In discussing Somalia, the speaker portrayed a multi-national/multi-organizational approach, including the UN, the African Union, the European Union and other organizations, all cooperating together while recognizing that national bilateral and international programs remain a continuing challenge to an integrated mission.

The final briefing of the day, which covered the UN Office of Military Affairs and Peacekeeping Operations, was presented by the Deputy Military Advisor to the UN DPKO, Major General Adrian Foster. He briefly discussed the DPKOâs history, its structure and functions, underlining the close integration of the UN military-civilian components in peacekeeping operations. Additionally, MajGen Foster provided information on the numerous ongoing UN peacekeeping missions and their underlying mandates. He spoke about the political process of PKO, the evolution of PKO over time and, finally, about future approaches to peacekeeping, including doctrine development, capability projection and outreach to organizations influencing the peacekeeping process, primarily in Africa.

All presenters provided CMs an excellent opportunity to learn more through their frank answers to direct and pertinent questions. CMs left the UN while looking forward to a few more hours in NYC before departing the next morning.