Arriving in Washington, DC on the afternoon of 7 May, the delegation quickly changed into their service dress uniforms for a special reception at Marine Corps Barracks, Washington DC hosted by MG Padilla, President of National Defense University, on behalf of Gen. Dunford, Commandant of the Marine Corps. 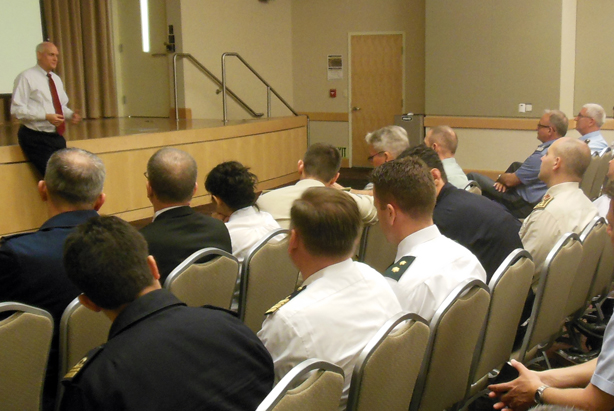 The next morning, the delegation arrived at the Pentagon to begin a long day of key events. The day began with a tour of the Pentagon, after which the initial discussion was led by Mr. James Townsend, Deputy Assistant Secretary of Defense for European and NATO Policy, who spoke about the evolution of NATO strategy on defense of the Alliance over the last two decades and about current US security policy regarding the future of the Alliance.

BGen John Jansen, Assistant Deputy Commandant for Programs and Resources, Headquarters Marine Corps and 2008 Ancien of the NDC Senior Course, then led a presentation on the US Marine Corps perspective on both US and global security. Beginning with a brief evolution of the Marine Corps, he quickly transitioned to the importance of partnerships and integration of defense-related activities.

The final presentation at the Pentagon was by MG Steven Shepro, Vice Director for Strategic Plans and Policy, Joint Staff J5. MG Shepro outlined the organization of the US Joint Staff and how it interacts with other agencies of the US government. He briefly discussed the policy development process and concluded with the J5 view of the world, including security, conflict, partnership development and emerging threats.

The delegation then transitioned to the US Capitol for lunch at the Capitol Visitors Center, some time to observe the interior of the US Capitol and the afternoon series of briefings. Ms Sarah Blocher, Professional Staffer for the House Foreign Affairs Committee, spoke about the Foreign Affairs Committee, focusing on the leading topics currently being discussed there, and followed up with an in-depth question and answer session covering a wide range of topics.

Mr John Daly, Special Legislative Assistant Marines Office of Legislative Affairs, led the final discussion. He described the interaction between the Marine Corps and legislators on Capitol Hill. An important factor in this respect is the process of creating a shared understanding between the representatives of the Armed Forces and members of Congress. He concluded with a frank discussion on the disparate prioritization of defense spending between legislators and the US military.

Each of the briefings at the Pentagon and US Capitol was complemented by a lively question and answer session. The delegation briefly returned to the hotel to properly dress for another evening at the Marine Corps Barracks, with the opportunity to observe the Marine Corps Band and Silent Drill Platoon performing their Evening Parade. The delegation then enjoyed the weekend in Washington, DC, which began with a guided tour of the Capitol Mall monuments on Saturday morning.

Monday found the delegation transitioning to International Organizations with a morning arrival at the World Bank (WB). Ms Angelica Silvero, Head of Speakers Bureau for the World Bank, began her discussion with an historical overview, explaining current structure and the prioritization of monetary policy decisions at the international level as an indispensable basis for economic growth. Highlighting governance as a significant dimension of policy, she detailed the organizationâs ultimate goal of ending poverty by enhancing shared prosperity around the world.

Following that, Mr. Patrick Cirillo , Principal Assistant to the Secretary of the International Monetary Fund (IMF), provided an excellent presentation on the history, organization and goals of the IMF. The organizationâs overarching mission being the promotion of global economic and financial stability, he dwelt on the IMFâs primary functions (Surveillance, Technical and Financial Assistance) and their direct relevance to overcoming current worldwide economic challenges. He concluded with a wide-ranging perspective on global economic prospects and appropriate strategies for (inter)national economic development.