Arriving in Brussels on 12 May, the delegation received a warm welcome from Captain-Commandant Anne Van Wiele of the Belgian Ministry of Defense, our support host in Brussels. Faculty and Course Members then traveled by bus to the Waterloo Battlefield, receiving a guided tour of this historic site. 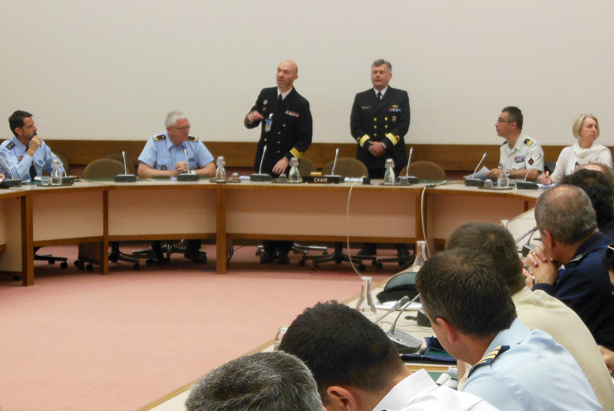 Arriving at NATO Headquarters on the morning of 13 May, the delegation was received by Commander Jose Henriques, International Military Staff, Operations Division (IMS-OPS) and Liaison Officer to the NATO Defense College. Commodore Hans Helseth, Deputy Director IMS-OPS Division, officially welcomed the delegation on behalf of the Chairman of the Military Committee. Cdre Helseth spoke about the topics being discussed at the Foreign Ministerial meetings occurring this week in Turkey. Among the topics covered were the results of the Wales Summit, including the Resolute Support mission in Afghanistan, enhanced partnerships, the Ukrainian Commission, current Russian Federation operations and the future of NATO-Russian relations, human migration into Europe from North Africa and, finally, the path towards the 2016 Summit in Warsaw.

On behalf of the Deputy Secretary General, Mr Andrew Budd of the International Staff Defense Planning and Policy Division (IS-DPPD) also welcomed the group and spoke about the current state of NATO, including defense budgets, military capabilities and, especially, the perceived âpeace dividendâ following the conclusion of the ISAF Mission in Afghanistan as well as its impact on NATOâs eastern and southern flanks. He described the current state of NATOâs Readiness Action Plan (RAP) and Very High Readiness Joint Task Force (VJTF), concluding with the development of policy on countering hybrid warfare.

Ms Rehanna Jones-Boutaleb, International Staff Partnership Affairs and Security Policy (IS-PASP), and Colonel Tom Smellror of the International Military Staff Cooperation and Regional Security Division (IMS-C&RS) spoke about NATO-Russia and NATO-Ukraine relations respectively. Together, they discussed NATOâs eastern border, including current and potential NATO-Russia relations. The NATO-Ukrainian partnership is stronger than ever, reinforced by an increase in bilateral engagement activities between NATO nations and Ukraine.

Mr Alexandros Papaioannu, IS-PASP, and Colonel Manuel Vela Garcia, International Military Staff Plans and Policy Division (IMS-P&P), led the final discussion of the morning on NATO-EU cooperation. Mr Papaioannu led off by describing this special partnership relationship between two international organizations as a partnership by necessity, in that all challenges faced by one are faced by the other (Afghanistan, Kosovo, the Mediterranean and hybrid threats). Col Vela Garcia focused on formal and informal NATO Military Committee-European Union Military Committee interaction, citing the example of numerous combined conferences.

All presentations concluded with dynamic question and answer sessions, covering the full range of topics being discussed throughout NATO. Course Members then had the opportunity to have lunch with their respective delegations, before traveling to the European Union for the afternoonâs presentations.

Upon arrival at the European Union Military Staff (EUMS) at the Council of the European Union building in Brussels, the delegation received a warm welcome from Lieutenant Colonel Christian Weniger, Deputy ACOS, External Relations office. The College greatly appreciates LtCol Wenigerâs outstanding support to our visits to the EU over the past three years.

The first presentation was led by Rear Admiral Waldemar Gluszko, Deputy Director General EUMS, providing welcoming remarks and introducing the group to âThe Role of the Military within the EUâ. He described the EU External Action Service (EEAS), the deployable capability of the EU, and related policies ensuring a comprehensive approach to all directed missions. Additionally, he portrayed the differences between NATO and the EU and outlined the structure, missions and role of the EEAS.

Brigadier General Heinz Krieb, Director of Concepts and Capability Directorate EUMS, spoke about âPriorities and Challenges 2015 and beyond â Tour dâHorizonâ. Beginning with a short overview of the EU, he discussed the current challenges facing the EEAS both regional and globally.

The final presentation for this Field Study was from Mr Jean-Baptiste Valmary, Deputy Head of Division for Conduct of Operations, Civilian Planning and Conduct Capability (CPCC), who provided an overall update and commented on Common Security and Defense Program missions in the Middle East and Eastern Europe. Using ongoing EEAS missions as examples, he discussed both positive and negative outcomes and their influence on political decisions within the EU.

Each of the afternoon presentations was followed by a challenging question and answer period.