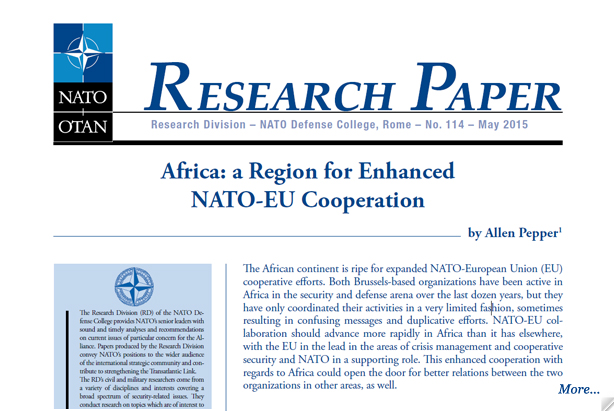 The African continent is ripe for expanded NATO-European Union (EU) cooperative efforts. Both Brussels-based organizations have been active in Africa in the security and defense arena over the last dozen years, but they have only coordinated their activities in a very limited fashion, sometimes resulting in confusing messages and duplicative efforts. NATO-EU collaboration should advance more rapidly in Africa than it has elsewhere, with the EU in the lead in the areas of crisis management and cooperative security and NATO in a supporting role. This enhanced cooperation with regards to Africa could open the door for better relations between the two organizations in other areas, as well.

According to the author, who recently served as an Army War College Fellow at the NATO Defense College, EU and NATO leaders should attempt to put this enhanced cooperation between the two organizations in place in Africa, and the progress there may eventually lead to better cooperation in other regions and subject areas, as well.