On 8 June the Commandant of the NATO Defense College, MGen Janusz Bojarski (POL F), made the opening remarks to the Senior Executive Regional Conference (SERC 4). This five-day course aims at promoting shared understanding on issues related to the Mediterranean and the Gulf, enhancing knowledge of current security challenges to the Alliance and its Partners, and allowing participants to familiarize themselves with current and prospective issues facing NATO. 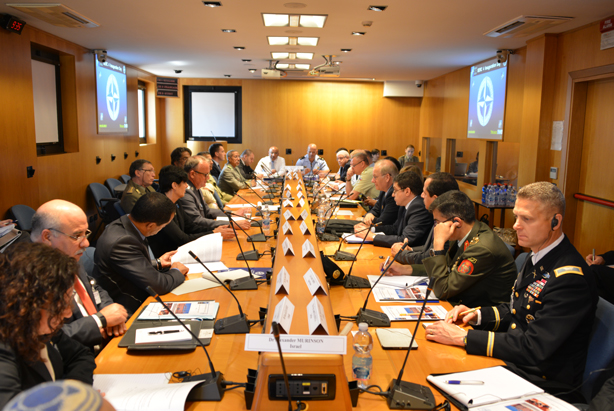 The topic for the opening session, ‘The Syria-Iraq Crisis and the Fight Against Extremism’, was discussed by Ambassador Frederic Hof, Senior fellow at the Atlantic Council; Dr Bassma Kodmani, Former spokesperson of the Syrian National Council; and Ambassador Şakin Özkan Torunlar, Director General for Southern Asia in the Turkish MFA.

The second day started with a lecture by BrigGen Jean-Marie Clament, Head of Regional Affairs at the French Ministry of Defence, on "Security and Stability in the Northern African Region". There was then a keynote speech by Minister Diallo Mamadou Bathia, Minister of National Defence of the Islamic Republic of Mauritania.

During the afternoon session, entitled "Israel's Perspectives on Foreign Policy and NATO Cooperation", the speaker was Ambassador Eynat Schlein, Deputy Director of the Centre for Political Research within the Israeli MFA.